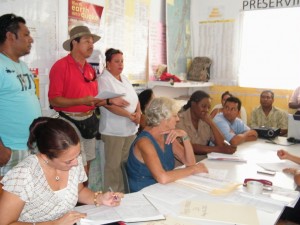 The San Pedro branch of the National Emergency Management Organization (NEMO) was officially activated at 1PM on Monday August 6th. The Emergency Operation Committee (EOC) has been in full operation as the island continues to monitor the progress of Tropical Storm Ernesto which is projected to be a Category One hurricane before making landfall. NEMO is advising residents living in the low-lying areas of Ambergris Caye to evacuate voluntarily to higher grounds.
Speaking to the press after a 2PM meeting at the NEMO office in San Pedro, Deputy Chairman of the EOC for San Pedro NEMO Branch Mayor Daniel Guerrero said that the San Pedro committee is ready. “We have been meeting since early this morning. I have advised the people (residents) to put their respective plans into action and to do so early. We are advising them to buy their food and water, their flashlights and batteries and everything they need to do, they need to do it early. I want everyone to do their part and not leave it last minute for NEMO to do,” said Mayor Guerrero.

Residents are advised to make the necessary arrangements to protect their properties including their vessels. Meanwhile Mayor Guerrero encouraged, “I am asking those living in the low-lying areas of San Pedrito, San Mateo, DFC and Eliot Subdivisions to move to higher grounds. If in case they want to move to the mainland, then tomorrow we will be doing so via the water taxi. However we are asking people to do so voluntarily now that they have time to do so,” said Guerrero. Five locations have been identified as shelters, should the need arise here on Ambergris Caye. Those locations include the buildings at the San Pedro High School, New Horizon Seventh Day Adventist School, Shalom Church, Living Word Church and the San Pedrito Evangelical Church.
At 6pm Tropical Storm Ernesto was located near 16.5° North Latitude, 82.1° West Longitude or about 415 miles east by south of Belize City or 447 miles east southeast of Ambergris Caye, Belize. Maximum sustained winds were 65 mph and movement was to the West-North-West at 11mph. On the projected path, Ernesto is expected to make landfall as a Category One hurricane on northern Belize sometime between late Tuesday evening and early Wednesday morning. According to retired Meteorologist and Hydrologist in Belize and Chairman of the Information, Education and Warning Committee in San Pedro Frank Panton, the weather will see significant deterioration on Tuesday as Ernesto comes closer to Ambergris Caye. “On its present track it should land somewhere through San Pedro Town or a little north. That means that the residents of San Pedro should start activating their hurricane preparedness plan and make sure that their actions plan is completed by midday tomorrow. We are advising voluntary evacuation especially if their living structures are not safe to withstand 75 to 85 miles per hour wind which we expect. Those winds would be, we expect at the extreme when Ernesto becomes a hurricane sometime after tomorrow morning,” explained Panton.

If the prediction remains the same, Panton said that when the storm makes landfall two significant things will happen. “There will be about three inches of rainfall in 24 hours. The next thing will be the sea conditions. We expect to get about 12 foot waves outside of the reef which will translate to about five to six foot waves on the eastern shore of the island. We don’t expect too much of a serious condition on the western coast of the island except the water from the conditions. With the waves hitting the docks, the less secure ones will begin moving and then with the 85 mph winds, it will do significant damage to the weaker docks,” detailed Panton
The islanders are therefore asked to be as prepared as possible to secure life and property. “The biggest concern will come after Tuesday night. Between Tuesday midnight and early Wednesday morning is going to be the worst part of the storm. Boat captains are advised to take their boats to safe harbor. There should be no panic but take the necessary precaution like to secure your homes,” ended Panton.
Meanwhile Mayor Guerrero echoed advising his residents to listen to the NEMO update and be prepared. “I don’t want anybody to panic. We need to be calm and once we have our preparedness plan in place everything should be ok. I know for some it will be a little bit costly but it’s better to be prepared than to lament,” ended Guerrero.
All evacuees are hereby reminded that you must have a three day supply of rations that includes: sanitary items, water and food, medicine supplies, flashlights with batteries, your own sleeping items, and so forth. All boat owners are advised to start moving their boats to safe harbor (lagoon side). Finally everyone is asked to stay on the alert and monitor the weather conditions and listen to the weather updates. Furthermore, the Belize Port Authority will inform the public on the closure of all ports.
People in the outer Cayes: Turneffe, Glover’s Reef, Light House, Half-moon Caye, Sand Bore Caye, Northern 2 Caye, North East, South West and Middle Caye and outer Atolls need to heed the warnings issued by NEMO and make necessary preparations to move in land. People who would like to leave voluntarily from the Cayes are encouraged to do so. People living in areas that normally flood need to move to a dry and safe building area and bring along their food and water. The San Pedro Sun will have regular updates as long as weather permits.