Tropical Depression Eta continues moving away from Belize into the north-eastern Caribbean. As a result, rains have slowed down, but major flooding is expected to continue in parts of the country. One such area is the western Cayo District, where flooding is intensifying as the runoff from higher grounds will continue feeding rivers and streams. In San Pedro Town, the aftermath of Eta left more streets flooded, battered beaches and several boats underwater.

Island fishermen said they did all they could to safeguard their boats, but the overwhelming constant rain was more than their vessels could handle. Some boats were moved ashore, while many were moved to the lagoon side of town. One particular boat owner shared that he kept checking on his boat through most of the night, but in a blink of an eye, it went underwater. 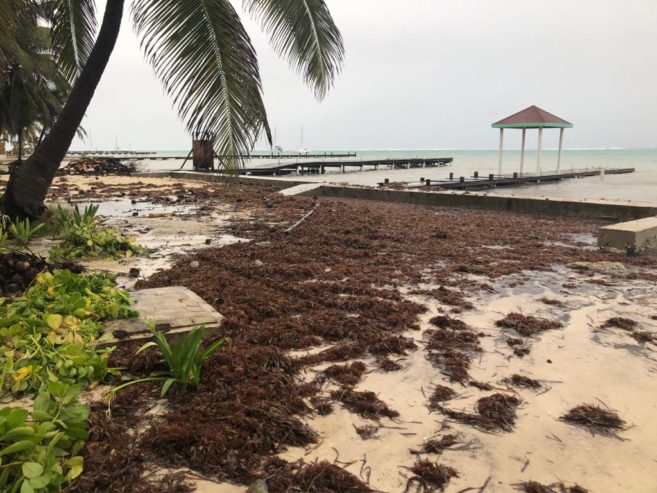 Several streets on the outskirts of downtown San Pedro became almost impassable, following heavy rains throughout the night. Some residents in flooded neighbourhoods became trapped and could not get out of their homes. Personnel from the National Emergency Management Organization (NEMO) are currently doing assessments on the island, particularly in low lying areas. No major structural damages have been reported on the island as yet.

A different situation on the mainland

The recent advisory from NEMO states that floods will continue affecting most districts. However, the weather is expected to improve within the next 24 hours as Eta continues moving away from Belize. Although the storm did not hit Belize directly, it left its mark with massive flooding in many municipalities. 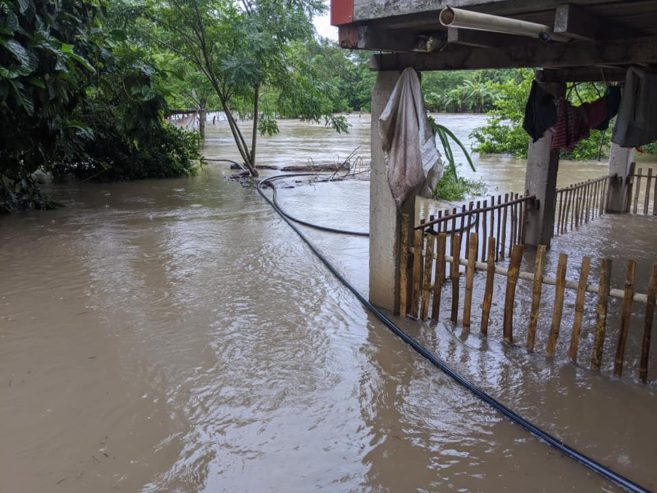 One of the main municipalities in Cayo, San Ignacio Town woke up today a horrifying site. A large portion of the town is under water and from images shared, the water is inches away from completely covering large buildings around its Welcome Centre Plaza.

Highways affected by the storm 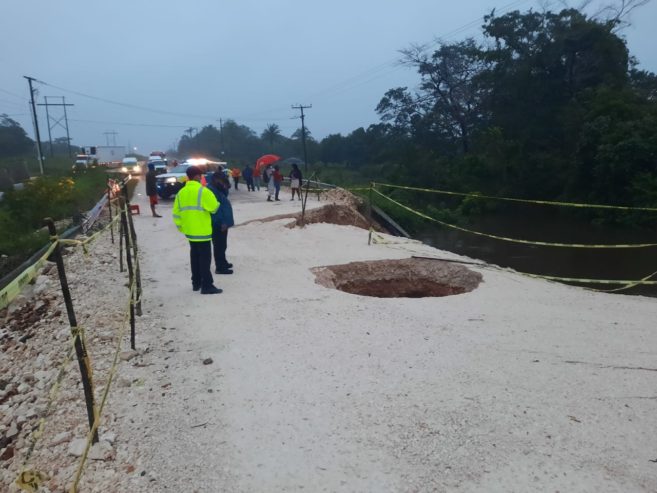 The George Price Highway was temporarily closed this morning after a 50-foot stretch on mile 38.5 was damaged by flooding caused by the torrential rain. The Ministry of Works has now allowed vehicles to pass to alleviate the traffic jam caused. The highway is expected to be closed again so repairs can continue. 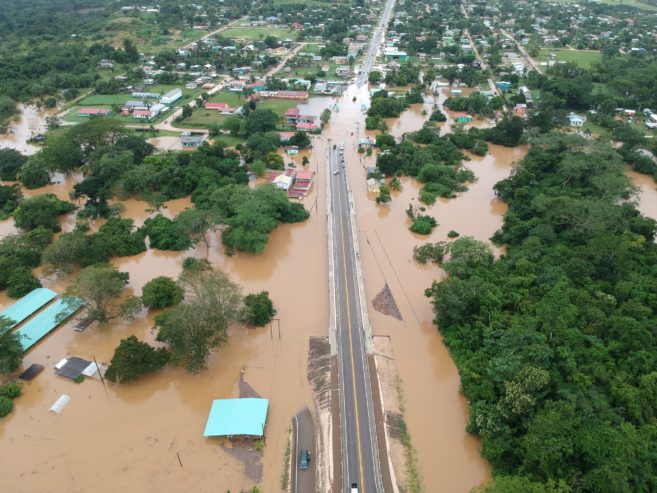 Roaring Creek Bridge affected by floodwaters. This village is at the entrance by the Capital City, Belmopan. (Photo by Mohit Surtani)

Persons traveling via the Hummingbird Highway or other roadways are cautioned to be extra vigilant for any potential slides. Motorists are also advised to be on the roads only if necessary as to reduce the chances of being trapped or injured.

Currently, up to 70 deaths have been reported by neighboring Central American countries of Guatemala, Nicaragua, Panama and Honduras. At least 50 were reportedly killed in landslides in Guatemala, two in Nicaragua buried in a mine and among the dead in Honduras is a 13-year-old girl. She was killed when the wall of her home collapsed onto her bed while she slept. In Guatemala, Eta buried 20 houses under thick mud after a landslide. According to reports, the island was triggered after a month’s worth of rain had fallen in less than a day. Panama reported eight missing citizens.

Eta first slammed into Nicaragua northern Caribbean coast on Tuesday, November 3rd as a Category 4 hurricane, with maximum winds of 140mph. Its trajectory now has the storm churning away towards Cuba, where Tropical Storm warnings have been issued.