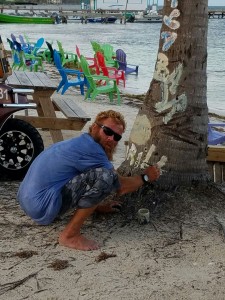 The lifeless body of San Pedro resident 48-year-old Miguel Angel Guerrero was discovered on Monday, January 29th in Dangriga Town in the Stann Creek District. Police have since launched an investigation after confirming that he died from a single chop wound to his neck.

The official report from police states that around 3:02AM police visited Havana Game Shop located in the Havana Area of Dangriga Town. Upon arrival, they observed a male person of clear complexion dressed in a camouflage jacket with camouflage short pants and black in color tennis shoes lying face down in a pool of blood, apparently dead. The deceased was later identified as the carver and painter from San Pedro.  Guerrero was observed with what appeared to be a large cut wound on the left side of his neck. As the body now awaits a post-mortem examination, police are investigating the chain of events the led to his demise.

Guerrero was affectionately known as Cabrillo on the island and would make a living from picking up painting jobs around town. The talented islander beautifully painted signs for businesses as well as carved creative items from wood and even coconuts.