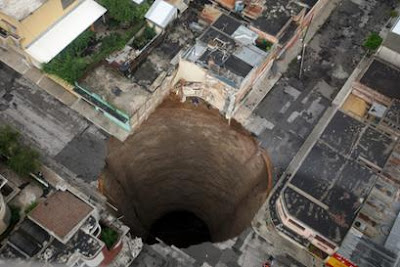 June 1st is the beginning of Hurricane season, but Tropical Storm Agatha hit Central America early, as it has caused devastation and loss of lives in Guatemala, El Salvador and Honduras over the weekend. Above is an image of a giant sinkhole that was created by the extreme downpour of rain, and swallowed an entire 3-story building.

According to the Associated Press, the European Union has granted euro3 million ($3.65 million) in emergency aid for victims of Tropical Storm Agatha in Central America.
The storm has caused flooding and landslides that killed at least 150 people and made thousands homeless in Guatemala, El Salvador and Honduras.
The EU says the aid approved Tuesday will go toward buying food, water, first aid kits, sanitation supplies and emergency shelters for some 100,000 people.
EU Humanitarian Aid Commissioner Kristalina Georgieva says “We will continue to monitor the situation closely, in case further needs arise.”
More than 160,000 people in Central America have been evacuated from their homes.