The Belize Police Department today Friday February 15th, released the crime figures for the first month of 2013. While overall crime showed a decrease in most categories, the most notable and significant increase is in murder. There were a total of 12 murders, eight more than the four recorded in the month January of 2012. Of the 12 murders committed in January 2013, 11 were in the Belize District while one was from the Cayo District.

Rape, robbery, burglary and theft saw moderate decreases, but carnal knowledge saw a spike of over 100%, increasing from five cases in January 2012 to 14 cases for the same period in 2013. The report also indicates that police continue to make little progress in overall arrest figures. The following is a breakdown of the statistics submitted by the police for the entire country. 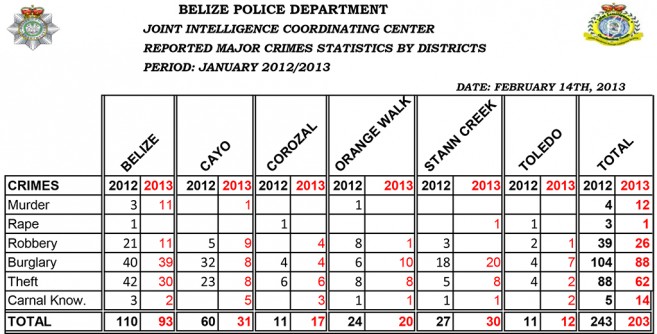 The statistics issued by the police is based on cases that were reported to the Police Department. Unreported crimes are not a part of the statistics.