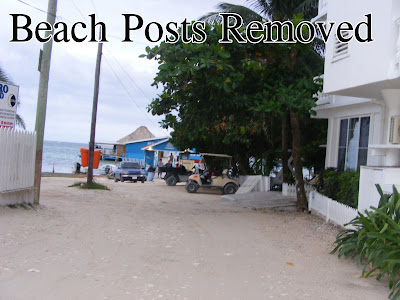 The deterioration of the beaches in San Pedro Town has time after time been blamed on the vehicular access to the beach front. In some instances, a number of actions have been taken to detour traffic to another access point. One of the areas that has been in the center of various standoff between local residents, local authorities and taxi operators is the corner of Sandpiper Street and the Beach Front just in front of Wet Willy’s Dock. Of recent, that access is now available to vehicular traffic in that area. For the past months, the posts have been moved from one location to another.
Mayor Elsa Paz explained that because the posts have become and issue of contention, a decision had to be made. “We have been back and forth with local residents in the area, business operators and taxi operators as to where the beach post should be placed,” she stated.
Mayor Paz explained that with the beach posts hindering access drivers would still make their way to the beach through other access points further down the road, something they [SPTC] had no control of. Mayor Paz ended by stating that the access was open temporarily since in early February the cobble stone project will commence from the roundabout and head to the end at the bridge in the Boca del Rio Area.
Mayor Paz advises motorist exert caution while using the beach front since it is widely used by pedestrians.

BTB Presents U.S. $59,934.00 cheque to Caribbean Tourism Organization as contribution to “A Dollar for the Caribbean Relief Fund”