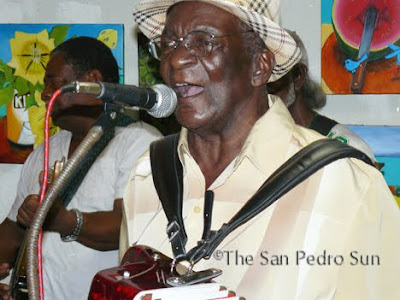 Moreover, his specific influences on the longevity of the Belize Kriol culture and language will reach into generations to come. Members of the National Kriol Council recall numerous instances when either his music, or his Kriol one-liners full of wisdom, or his incredible sense of humor made many an event that much better and more fun.
National Kriol Council President Myrna Manzanares recalls Mista Peetaz great contribution to be as follows: ” Mista Pete has left a legacy for us to enjoy. And he has shown that his beloved Kriol language should never be downplayed as it was the language of his heart. “Wen Mista Peetaz taak er sing – noh mata eena poblik er eena praivit – di Kriol langwij ahn kolcha shain!” He travelled the world and spoke to men, women and children without being ashamed of his culture or his language. Mista Peetaz truly loved his culture. He was a “true true Kriol” without any apologies. The National Kriol Council hopes all Belizeans will take a page from his life, or, indeed, a tune from his songs.” Bredda David, creator of Belizean Kriol kungo music, credits the almost decade long musical teachings he received from playing with Mista Peetaz and his “Boom ahn Chaim” band as being the signal influence on his own music. The National Kriol Council sends its deepest respect and sympathies to the family of Mista Peetaz, Brokdong King, Kriol giant, and Belizean icon.