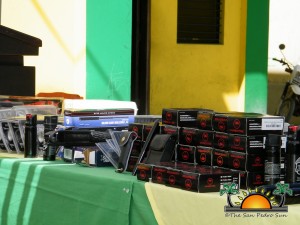 Hardly a week after the public meeting on crime at the Rafael Angel Nuñez Auditorium there are positive results coming out of the San Pedro Town Council (SPTC), who over the past week, held several emergency meetings with various business people and stakeholders. Five new police officers have been assigned to the San Pedro Police Formation and housing, along with transportation, has also been secured. In addition two very substantial donations were received by the SPTC, which was handed over to police on Thursday, November 8th.

When speaking to The San Pedro Sun, Mayor Daniel Guerrero explained that after the public meeting on Tuesday October 30th, many people expressed willingness to assist both the SPTC and the Police Department on the island to address the crime situation that has spiked out of control. One of the first persons to reach out was John McAfee, renowned businessman and part-time resident of northern Ambergris Caye. “Due to concerns of the people in the last meeting we promised to go into first gear. Mr. John McAfee called me immediately after hearing about the concerns as it related to crime…he came very generously and said he will equip the police force in San Pedro with anything that he could at the time and is willing to give even more. He has promised the Council that his boat is available anytime for the Police Department if they need it. He is also willing to host all five police officers in five air-conditioned rooms at his establishment and transportation for them will be free of cost via Coastal Express,” said the Mayor. 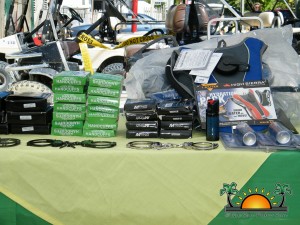 Speaking at the handing over ceremony at the San Pedro Police Station, Mayor Guerrero said that “We know that the issue of crime is everyone’s business. Our island is a tourism destination and the increased crime on the island has led to travel advisories to be issued against us. This will decrease our tourism arrival and we must address the matter with extreme urgency.” Those words were later echoed during the inauguration of the John Grief II San Pedro Airstrip later during the day in which he called on the Minister of Tourism Hon. Manuel Heredia and the Cabinet to deal with the matter with a level of urgency.

As part of equipping the police department, McAfee made a very substantial equipment donation. 40 assorted Vipertek Stun guns, 7 SCHRADE SWAT batons, 3 SCHRADE Professional SWAT batons, 2 Security Pro batons, 60 assorted brands and types of pepper spray, 46 assorted heavy duty metal handcuffs, 12 Lumen Premium Led flashlights, 7 streetwise metal detectors, 5 High Sierra brand hydration backpacks and a battery charger were amongst the arsenal of equipment donated. According to Mayor Guerrero, the donation is only the beginning, with more to come as promised by McAfee in a private meeting hosted at the SPTC building. McAfee said that “A society without law is not a society… laws are necessary to curb the negative aspect of the ‘human animal.’ Law however is useless without the ability to enforce them… much of the donation is based on the psychological aspect of the weaponry,” said McAfee. A small vessel complete with engine was also handed to the SP Police Department by McAfee for the use of the department as they see it fit.

The McAfee donation comes just in time, and coincides with another donation from the Belize Tourism Board facilitated by the Minister of Tourism and Culture and Area Representative Manuel Heredia Jr. According to Mayor Guerrero, BTB is donating 12 Motorola handheld radios to the council which was also handed to the police department. In addition, BTB is also donating ten high technology wireless surveillance cameras to the council which they hope to place in strategic areas along the most trafficked beaches of San Pedro Town.

At hand to receive the equipment was the Officer Commanding the Coastal Executive Unit of the Police Department and Officer In Charge of the San Pedro Police Formation female Assistant Superintendent of Police Viennie Robinson. In receiving the donation, ASP Robinson said that the donation is most welcome, especially in the fight against crime, which was a major concern in the public meeting.

The SPTC is also working along with central government to improve lighting in crime prone areas. Meanwhile the San Pedro Police Department is calling on members of the public to join the Special Constable Program which they believe will drastically reduce criminal activity on the island.