A US National was murdered on Ambergris Caye sometime between the night of Saturday, November 10th and Sunday November 11th on northern Ambergris Caye. The police are yet to make an arrest but are looking for John McAfee, who they believe may be able to assist them in their investigation. The incident took place in the Mata Grande area some six miles north of San Pedro Town and the victim has been identified as 52-year-old Gregory Viant Faull, a retired American of state of Miami, Florida USA. Faull was found by a housekeeper inside his living room with an apparent gunshot wound to the back of his head.

According to Police Press Officer Rafael Martinez, 39 year old Laura Tun, a housekeeper of the Boca del Rio area of San Pedro Town arrived at around 7:20AM at Faull’s residence to conduct routine house cleaning. Tun reported to police that after she entered the house, she noticed Faull in a motionless state and lying on the floor of the front living room. 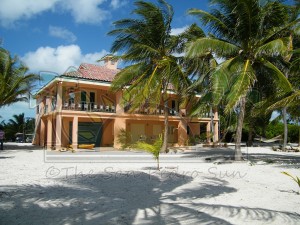 Later in the morning, San Pedro police visited a two-story concrete home situated on the beach area in the Mata Grande area where the crime scene was processed. Officer Martinez confirmed that an expended 9 millimeter shell was found inside the room which is consistent with the single apparent gunshot wound to the back of Faull’s head. Police claimed that no possible motive has been established and San Pedro Police confirmed that there were no visible signs of forced entry to the building.

Later during the afternoon, a team of investigators from Belize City visited the scene along with members of the San Pedro Police Department were the scene was processed a second time. During the process, neighbors were questioned to determine certain information that police believe may assist them in their investigation. Police also questioned a male Hispanic caretaker of Faull’s private residence who told police the he did not hear anything out of the ordinary, especially since it had rained during the course of the night.

Residents in the area told The San Pedro Sun that Faull had a misunderstanding with a neighbor in the area and believe that the dispute may have escalated. According to the neighbors, Faull’s concerns as it related to the person in question were shared by other residents of the Mata Grande area. Those concerns had to do with armed security intimidating residents along the beach and according to the neighbors in the area, the issue was brought up to the San Pedro Town Council.

The Head of the Gang Suppression Unit (GSU) of the Belize Police Department Unit Mark Vidal confirmed to The San Pedro Sun that they are looking for McAfee as part of the murder investigation. Vidal explained that when a team of investigating police officers conducted a search of  McAfee’s residence, his beach side home next to Faull’s home, no one was found.

Although there was no sign of forced entry, a laptop computer and an iPhone were discovered missing. The body of Faull was taken to Karl Heusner Memorial Hospital (KHMH) Morgue where it awaits a Post Mortem Examination. No one has been arrested but police remain positive in the course of their investigation and according to Martinez, they are following a number of leads. Anyone that has any information that can assist the police in their investigation are asked to call crime stoppers at 0-800-922-TIPS.