Jacqueline Godwin reporting: A visitor to Caye Caulker nearly lost her life when her throat was cut by an armed robber. Fortunately she lived and will recover but with such a bold attack, the question is can Belize’s tourism product take the injury in such a tenuous time? She told me her story today. 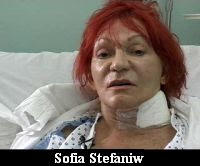 Sofia Stefaniw, Victim of Brutal Assault/Robbery: “I am just in shock. I guess, I would have preferred for this not to have happened. God willing I will recover. It will take a while for the swelling to go down and…but as far as the doctors are saying it is just a matter of time.”
Twenty four hours after only just arriving in Belize on Monday night sixty six year old Canadian nurse and tourist Sofia Stefaniw was helicopter to Belize Health Care Partners Limited where she is recovering from a deep chop wound to the left side of her neck. Earlier that night Sofia and her Canadian friend fifty five year old Valerie Walker a resident of Caye Caulker were held up and attacked by a man holding a machete and knives.
Sofia Stefaniw: “We had come back from a place called the Sandbox, we biked back and then we arrived into her yard and it was quite dark. There are a few lights but it is quite dark and out of the bushes this guy just came out with a machete and a knife, one in each hand. He said I want your money. I remember that, ‘I want your money,’ and I said I will give you my money and I believed that is when he whacked me and then Valerie was trying to get the money out of her pocket and he stabbed her with the knife. I think he used the knife on her, hers was just on the side but mine was a laceration and it nipped an artery.”
Jacqueline Godwin,Because you are a nurse by profession, you knew it was a serious injury?