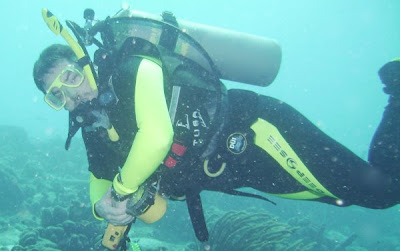 On September 13, scuba diver Robert Silva of will be traveling to Ambergris Caye where he plans to set a new world record for the longest saltwater dive – an entire 36.5 hour dive. Initially, the daring diver planned to break the record for the longest freshwater record (120 hours) in Haigh Quarry in . However, liability and insurance issues forced Silva to look for other diving expeditions that would help him achieve his goal.

He received an offer to challenge the saltwater record from Ramon’s Village in San Pedro, Ambergris Caye. Having already received his PADI Divemaster certification in in 2005, Silva knows he will be in familiar waters.

Though the dive will now be shorter than the 120 hours he had planned, he also has to contend with the hazards of an unpredictable ocean dive. Silva has been a team captain for the American Cancer Society’s “Relay For Life”, and is always looking for new ways to raise money for the charity. This year, he is combining his love of diving and the chance to raise money for a good cause. Ramon’s Resort will be providing most of the staff for the dive, but he will also be arriving with 5 of his team members. 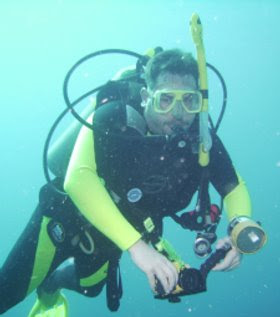 Following are a few questions and answers as posted by www.matadorsports.com:

Q. What are the official rules for attempting to break this record?

The rules, as they have been explained to me, are that I must not surface at any point during the attempt. It must all be done on standard scuba gear and tank changes must be done underwater. [I must achieve] a depth of 20 feet for at least 20 minutes; outside of that I can be at any depth.

Q. 36.5 hours is a long time to be underwater. How will you eat and sleep?

My diet will consist of mainly liquid meals. The plan is to use a Camelbak-type system, like hikers use. To sleep , the plan is to clip off to a line and just try and relax enough to sleep for a bit. Support divers will always be in the water while I’m trying to sleep to watch my air supply, so I don’t run out.

(Silva plans to spend the rest of the time listening to music, playing some games underwater, talking to the team via two-way communication units, and of course, watching the wildlife).

Q. What kind of physical training are you doing to prepare for your attempt?

The biggest training item is time in the pool, just experiencing long duration and gear changes underwater. I am eating healthier than I have in the past. More than athleticism I believe it is going to take the proper mindset to get through the dive. I’m not going into this thinking it will be a cakewalk to sit underwater for so long. I know it will get harder on my body and mind the longer I stay under.

Q. What are the main challenges that you expect to face?

The main concern I have will be the weather. The weather can make or break this event.

I’ve had people ask about sharks, and things like that, [but] one thing I’ve realized is that sharks are not mindless killers. I’ve seen sharks while diving in the past and they were never a problem. I expect to see mostly nurse sharks, and they tend to be very docile.

Q. To what degree does your dive’s success or failure depend on luck?

I think luck only applies to the weather; September is a of Hurricane season. I’ve been to this same dive spot in September in the past with perfect weather, but again, it’s out of my control. Being as prepared as possible will give me the best chance of success.

Q. What kind of potential emergencies or problems are your preparing for?

The biggest issue will be possible gear problems. Saltwater can be hard on the gear; having to do tank changes underwater could introduce saltwater [into] my regulator.

I plan to have secondary gear on the boat that can be sent down to me if needed, and also a second setup put together and ready for use on a line beneath the surface. I have scuba medical insurance, which includes airlifting me off the island if it becomes needed.

Q. If you succeed in your attempt, you will have done something that no diver has ever done before. Where do you see yourself going from there?

I guess I could see myself making another attempt at the same record. I’ve also been looking into other scuba-related records for future attempts.