John and Ros Emberley have been visiting San Pedro for over ten years and presently spend six months of the year on the island. They were on their way to lunch when earlier this afternoon, Ros’s necklace was snatched from her neck.

According to Ros, they were about to enter the Blue Water Grill around 12:30pm when she stooped down to remove something from her leg. She felt a snag on her neck. It all happened so fast and when she looked up all she could see was the individual’s back as he rode off on a bicycle. A waiter from the restaurant saw what happened and immediately started in pursuit. 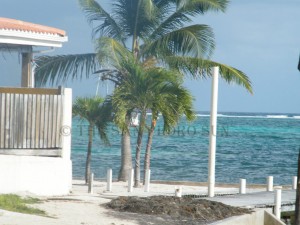 Nearby at BC’s, off duty Tourism Police Officers, Shedrack Dominguez, WPC Dougal and PC Humes were socializing and noticed the young man riding off on his bicycle being pursued by the waiter who was shouting “robbery”.

Humes and Dominguez immediately took to the streets on their ATV in pursuit. They noticed the person riding his bicycle on the street heading south where they intercepted and detained him near SAGA. The individual went on to resist his detention. He was consequently arrested and searched however, the item was not recovered.

The male person was detained pending investigation. The necklace was valued at $1,000. The couple travelled to the San Pedro Police Department where they made their report. As to whether this incident will dampen their thoughts of San Pedro, Mr. Emberley stated that immediately yes, but not long term. They love San Pedro however they just want people to know that this is happening. The San Pedro Sun takes this opportunity to invite all our residents and guests to be alert as you go about your daily business in order to safeguard yourselves and your belongings.