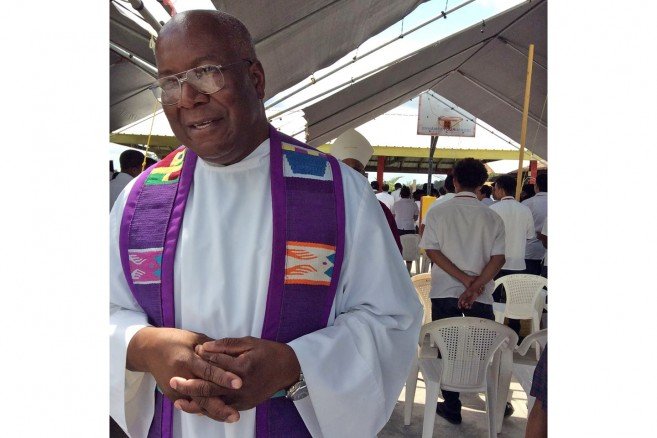 The name of well-known Roman Catholic Priest Father Oliver Smalls Jr., of the Diocese of Belize City-Belmopan, is on a ‘credible’ list of clergymen who have allegedly committed sexual abuse against minors. This list was published by the Catholic Diocese of Richmond, Virginia USA, as they intensify their efforts to assist survivors of abuse.

In a letter published on February 13th by Bishop Barry Knestout of the Richmond parish, he offered deep gratitude and apologies to the victims and survivors. “Today, consistent with my promises of transparency and accountability, I am publishing a list of clergy that has a credible and substantiated claim of sexual abuse against a minor. I express my deep gratitude to the victims and survivors that have come forward and for your patience as we prepared this list. As your bishop, I am called to be a good shepherd, attentive to the care and needs of all our people, especially the most vulnerable. Therefore, I asked for an independent and comprehensive review of clergy personnel files, and the files from the Diocesan Safe Environment Office and the Diocesan Review Board,” he said. Bishop Knestout further added, “By publishing this list, we can help bring about healing to those who have experienced abuse in the Church and heighten the awareness of this tragic situation.”

The list was updated on February 15th and includes Oliver Joseph Smalls, a popular Belize-based priest. Father Smalls appears under the sub-heading “Religious and Priests of Other Dioceses with allegations of abuse that occurred in the Catholic Diocese of Richmond.” Many of the others priests whose names appear on the list are either deceased or have been convicted of their crimes. Smalls’ status is listed as ‘unknown’. Reports are that the Catholic Church of Belize has been informed of the allegations against Smalls and he has been informed that he can no longer continue to preach as a member of the clergy.

Cases of child sexual abuse by Catholic priests and members of religious orders have been alleged for years and led to many allegations, investigations, trials, and convictions, as well as revelations about decades of attempts by the Church to cover up reported incidents. The abuse reports include mostly boys but also girls, some as young as three years old, with the majority between the ages of 11 and 14. Many are cases in which an adult victim states that as a child they were abused by a clergyman. Cases have also been brought against members of the Catholic hierarchy, who covered up sex abuse allegations and moved abusive priests to other parishes, only to have the abuse continue. On February 6th Pope Francis admitted that clerics have also sexually abused nuns, adding that in one case, they were kept as sex slaves. “There are some priests and also bishops who have done this,” said His Holiness in response to a journalist’s question on the abuse of nuns. He stated the Church was aware of various scandals and had suspended clerics. “It’s a path that we’ve been on. Pope Benedict had the courage to dissolve a female congregation which was at a certain level, because this slavery of women had entered it – slavery, even to the point of sexual slavery – on the part of clerics or the founder.”

In his February 13 letter, Bishop Knestout further wrote, “To those who experienced abuse from clergy, I am truly, deeply sorry. I regret that you have to bear the burden of the damage you suffered at the hands of those you trusted. I am also sorry that you must carry the memory of that experience with you. Moreover, I apologize to family members and friends of the abused, and to all members of the Catholic Church. This crisis calls us to be immersed in three aspects of reconciliation. We need to bring to light the damage that has been done by child sexual abuse in the Church for healing to take place. We must express our sorrow and contrition publicly and clearly to acknowledge what we have done and what we have failed to do. We must continue to demonstrate our commitment never to let this happen again. In doing so, we make known — and support with actions — our commitment to repair the damage that has been done.

To the victims and all affected by the pain of abuse, our response will always be about what we are doing, not simply what we have done. We will seek not just to be healed but will always be seeking healing. Be assured I will do all in my power to restore your trust and to make our Church an authentic witness to the Gospel now and throughout our journey to eternal life.”

The San Pedro Sun will continue following the developments into this story, particularly as it pertains to Fr. Smalls in Belize.