Belize has a population of 333, 200 according to the most recent census conducted in 2010. Of that total population 70% is considered to be at the age of 35 and below. For that reason Belize’s society is considered to be ‘young.’ And in order to drive maximum benefit from this human resource, the Government of Belize (GOB), through the Ministry of Youth and Sport compiled a document called National Youth Development Policy of Belize 2012-2022 geared toward addressing the young population of Belize. The policy was officially launched earlier this year in Belize City but a team from the Ministry of Youth and Sport has been travelling to the different municipalities conducting individual launches. On Thursday March 14th, a launching took place in San Pedro Town at the Angel Nuñez Auditorium.

The policy was compiled by the GOB after consultation with the youth force from across the country during different forums. It outlines GOB’s commitment to supporting youth participation and giving them access to proper tools including adequate information for their own development. The policy’s commitment also gives existence to a National Youth Commission (Youth Parliament) as an autonomous youth body that will be responsible for the implementation and monitoring of the policy.

According to the Minister of State with Responsibility of Youth and Sport, Herman Longsworth, the policy encourages dialogue between Belizean youth and related Government Ministries. He said that the most important factor in the 58 page document is that the policies were devised by the youth. “Well I think the fact that the policy was developed by the youth themselves is something that has never happened in this country. We have never given our young people the wherewithal to try to move forward themselves. We’ve always try to dictate to them and tell them what is right for them, but never sat down and listened to them. This policy is the result of major dialogue between adults and youth, with the youth leading the process. So I think that is the biggest plus for the policy,” outlined Longsworth.

The policy was compiled with the assistance of the United Nations Children’s Fund (UNICEF). Longsworth said that the policy is basically a structural tool through which the young people can access GOB’s help. “The policy is a structure; it is more of an enabling document to ensure that we move the things that the youth want. I think the most important thing that the policy does is to provide the wherewithal for the youth themselves to say where they want to go. So really the policy is simply a structure to enable them to come to us and say, ‘look these are the things we want to see happen’ and we will then provide them with the wherewithal to hold us to task in achieving these things for them.” 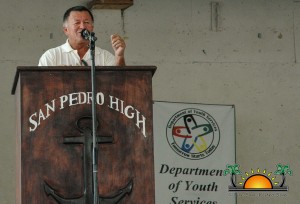 Present at the event was the Minister of Tourism and Culture Manuel Heredia Jr. who addressed the gathering of students from both Caye Caulker Village and San Pedro Town learning institutions. Heredia spoke of his youthful days in the small fishing community and the challenges they faced as young people who aspired for an education. He explained his determination in obtaining an education, having to traverse the seas to Belize City and sacrificing family time. According to Heredia, during the summers and weekend, he would go fishing, sell his catch of the day and assist the family in paying some of his educational expenses. “Now our young people want everything easy. We don’t want to be able to give them what they want without them appreciating the value. We want them to work their way through. We will provide them with the tools to become better citizens and better people,” said Heredia.

According to Minister Longsworth, the launching in San Pedro Town saw the largest gathering of students, second only to the Belize City launching. He said that as an indication of their commitment, GOB has approved for the Belize Rural South Area with a Youth Coordinator as well as a Sport Coordinator. By providing the two coordinators, the youth of both islands will be able to get more involved in the decision making process as well as provide for a forum to have more sporting events in the area. The National Youth Development Policy of Belize 2012-2022 is in line with GOB’s Horizon 2030 commitment.