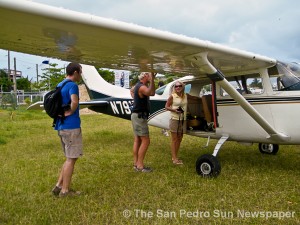 LightHawk is a volunteer-based environmental aviation organization that provides donated flights to conservation groups. Founded in 1979, LightHawk provides flights as a tool to accelerate conservation efforts and their give their partner’s headway in their work.

LightHawk donates missions across the United States, Mexico, Central America and parts of Canada through skilled volunteer pilots who share the aerial perspective with close to 250 conservation partners each year. On Ambergris Caye, LightHawk has been working with ACES for about a year and a half and have donated four flights so far. According to Cherie – each flight runs the value of US$500. Pilots donate their time and fuel for these flights.

LightHawk has assisted and continues to assist ACES immensely through flyovers to assess possible croc nesting sites, habitat availability, and mangrove clearing on Ambergris Caye and nearby Cayes including the American crocodile’s premiere nest area in Belize, Turneffe Atoll.

The purpose of the nearly two-hour flight over northern Ambergris Caye was to collect information that would assist ACES with locating and documenting additional relocation sites for nuisance crocodiles; identify new clearing(s) of endangered Red mangrove in the name of development; and any interior lagoons that ACES may have neglected during this past year of surveying.

The flyover took the team over the Bacalar Chico National Park and Marine Reserve where the main purpose was to assess lagoon depth for future relocation sites and access routes to those sites.
The team also flew over smaller interior lagoons to document American crocodile habitats that have not been included in the survey as well as access to these lagoons.

The final purpose of the fly over, which coincided with the others, was to identify any new mangrove clearings which will then be reported to the Ministry of Natural Resources and the Environment and the Belize Forest Department to determine whether those areas have the proper permits and are not being cleared illegally.

The flight took the team all the way north on the west side of the island to the Mexican Border, then to the eastern shore of Ambergris Caye, circling much of the wetlands and mangrove habitats as well as the beach area.
ACES would like to take the opportunity to extend their appreciation to LightHawk for their generous contributions to their crocodilian research. The information they collect from these fly-overs is invaluable to their surveys and data.