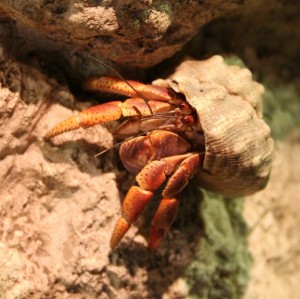 Carrie Bow Cay is a tiny island in the Caribbean Sea, about 14 miles off the coast of Southern Belize. The island is so small—0.77 acres—that you can walk its entire perimeter in under 10 minutes. Scientists regularly visit Carrie Bow Cay to study coral reefs, mangroves and seagrass meadows, as well as the animals that live in these unique ecosystems.

When Sara Lewis and Randi Rotjan of Tufts University travel to Carrie Bow Cay, they spend most of their time underwater, examining corals. But they also wanted to make the most of their time on land, inbetween dives. So the biologists decided to study the behavior of Caribbean hermit crabs (Coenobita clypeatus), around 1,000 of which live on Carrie Bow Cay’s sandy shores.

Like all hermit crabs, Caribbean hermit crabs—which are the most popular pet variety in the United States—depend on other creatures’ shells for protection. Strip a hermit crab of its shell and you will see its soft, pink abdomen curled behind its head like a fern’s frond. Most hermit crabs favor snail shells, although some use the shells of bivalves, like clams and scallops, and others have made do with driftwood, stones and pieces of glass or plastic bottles.

In 2009, Lewis and Rotjan surveyed the entire hermit crab population on Carrie Bow Cay. Many crabs were living shells that were a tight fit or had one too many holes. As they grow, hermit crabs must move into larger shells, so they are always on the lookout for a more spacious dwelling. And an undamaged shell is preferable to a broken one, even if the shells are the same size. Knowing this, the researchers decided to dramatically change the available hermit crab real estate on Carrie Bow Cay. They placed 20 beautifully intact shells that were a little too big for most hermit crabs at various spots around the island and watched what happened.

When a lone crab encountered one of the beautiful new shells, it immediately inspected the shelter with its legs and antennae and scooted out of its current home to try on the new shelter for size. If the new shell was a good fit, the crab claimed it. Classic hermit crab behavior. But if the new shell was too big, the crab did not scuttle away disappointed—instead, it stood by its discovery for anywhere between 15 minutes and 8 hours, waiting. This was unusual. Eventually other crabs showed up, each one trying on the shell. If the shell was also too big for the newcomers, they hung around too, sometimes forming groups as large as 20. The crabs did not gather in a random arrangement, however. Rather, they clamped onto one another in a conga line stretching from the largest to smallest animal—a behavior the biologists dubbed “piggybacking.”

Only one thing could break up the chain of crabs: a Goldilocks hermit crab for whom the shell introduced by Lewis and Rotjan was just right. As soon as such a crab claimed its new home, all the crabs in queue swiftly exchanged shells in sequence. The largest crab at the front of the line seized the Goldilocks crab’s abandoned shell. The second largest crab stole into the first’s old shell. And so on.

No one had ever documented such well-orchestrated shell swapping before, but similar behavior was not unknown. In 1986, Ivan Chase of Stony Brook University made the first observations of hermit crabs exchanging shells in a “vacancy chain”—a term originally coined by social scientists to describe the ways that people trade coveted resources like apartments and jobs. When one person leaves, another moves in. Since then, several researchers—including Lewis and Rotjan—have studied the behavior in different hermit crab species. Some preliminary evidence suggests that other animals use vacancy chains too, including clown fish, lobsters, octopuses and some birds. As Chase explains in the June issue of Scientific American, vacancy chains are an excellent way to distribute resources: Unlike more typical competition, a single vacancy chain benefits everyone involved—each individual gets an upgrade. So it makes sense that hermit crabs and other animals have evolved sophisticated social behaviors to make the most of vacancy chains.

The orderly vacancy chain that Lewis and Rotjan observed is called a synchronous vacancy chain, which is different from an asynchronous vacancy chain in which a lone crab encounters a shell, claims it and leaves behind its old home, which is later seized by a different crab that never interacts with the first animal. As the above video makes clear, however, synchronous vacancy chains are not always civilized affairs. Sometimes crabs fight each other for the best shell or gather in violent groups. And the exchanges often happen extremely quickly. Lewis and Rotjan had to slow down the footage just to see what was happening and it is still difficult to make out: three hermit crabs crowd a large green shell; the largest claims the green shell and the other two swiftly trade up. Lewis thinks the chain would have been more orderly if the crabs were not disturbed by two biologists filming them.

“Hermit crabs really have to think about and evaluate these shell resources—these are life and death decisions,” Lewis says. “They’re interesting to look at from that perspective. They have greater than average crab intelligence.” Lewis wonders whether hermit crabs release chemical signals to attract nearby crabs and start a vacancy chain, which is what she wants to investigate next. As soon as she finds time to return to Carrie Bow Cay.