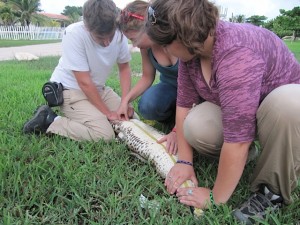 Olivier Mathiaud, Viviane Heily, both from Nantes, France, and Chelsea Canon, a student from New Mexico State University, USA, came to Belize through The Belize Wildlife & Referral Clinic’s internship program, which was established to support the activities of the Belize Wildlife Conservation Network, its members and wildlife work for the Government of Belize.

During the week-long internship with ACES on Ambergris Caye, Belmopan’s OpenLearningTV, Channel 17, came to film their experience with ACES crocodile conservation efforts.

The team filmed the capture, tag and release of a large male American crocodile being tagged as part of ACES ongoing population survey. 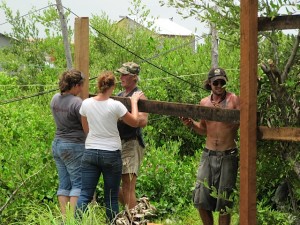 Vince with the release of a crocodile rescued last month that had been hooked by a local fisherman. “We removed the hook from the croc’s leg and kept it for a short while in a secure holding pen to be sure it healed properly. The reward of our volunteer work is in knowing that we are helping to preserve a species, that has been around for millions of years, for the children of Belize,” stated ACES biologist Cherie. The show will air sometime this August and can also be viewed on Central Cable Vision, Channel 18.

The interns also assisted ACES in building a perimeter fence for ACES Wildlife & Croc Refuge currently under construction in the San Mateo area. Local residents are supportive and eager for the new facility to open. For more information please go to: AmericanCrocodileSanctuary.org