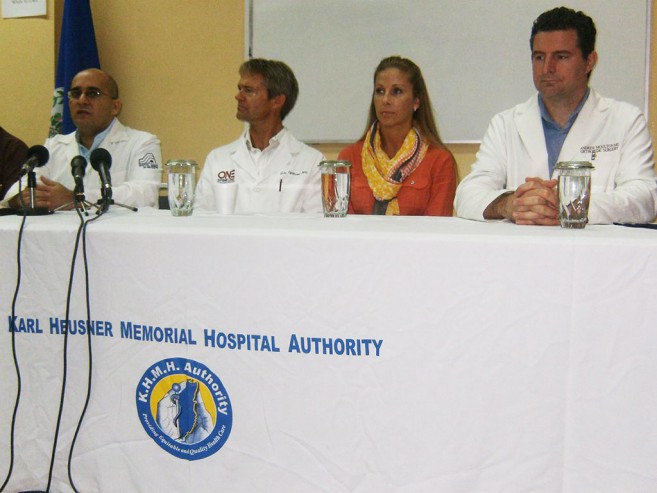 Dr. Andrew Moulton, a New York based Pediatric Orthopedic Spine Surgeon, was matter of fact as he described the historic first scoliosis corrective surgical operation performed in at the Karl Huesner Memorial Hospital two days ago on a 13-year-old Belizean girl.

Although his manner appeared professionally detached, it was clear to those in attendance at this morning’s press conference that he was very pleased with nearly all aspects of the complex undertaking, especially the results so far.

His colleague, Dr John Williams, an Indiana-based Orthopedic Spine Surgeon, said that by this morning the teen was already able to sit up in a chair less than 72 hours after having the life-altering 6-hour operation.

Scoliosis is described as an abnormal curving of the spine in this particular patient’s case, Dr. Williams said that the curvature had grown by 20 degrees between their examination and diagnosis 6 months ago, and the surgery this week. Until Wednesday she faced a life of misery, pain and the vulnerabilities caused by the mal-formation, and the distinct possibility of an early death.

Dr. Moulton explained that surgery consisted of implanting several “pedicle screws” into the spine to straighten the curvature. The pins which cost approximately in excess of US$1,000 each, were a donation from NuVasive Spine Foundation of San Diego, California, United States, as were the specialist services,  other equipment and supplies for the operation that is estimated would have cost US$90,000 to $150,000 if it had been done there.

Both doctors were highly complimentary of Karl Huesner Memorial Hospital and what Dr. Moulton called the “comprehensive team” organized “to mange the patient’s inter-operational care” which led to the successful outcome of this historic surgery.

The advent of advanced spinal surgeries was made possible, the press release explains, “through the partnership of KHMH, the Belize Spine Program (BSP) and the Resources for Medical Education and Collaboration (RMEC). RMEC is a US based non-profit organization, which collaborates with BSP to bring sustainable access to spine care for the Belizean population.

Ms. Keri George, RN, is the Clinical Coordinator for the Belize Spine Program which spearheaded this week’s surgical mission, participated in the screening and intervention of patients with severe spinal deformities. She said that their objectives go beyond providing patient care and also includes education and training.

She described the KHMH team as “wonderful”.

“We live in a country that has a lot of resources,” and it was their determination to share.

Dr. Williams explained that the Belize Spine Program “had gone from a vision to living entity on the ground.”

They chose Belize for “pragmatic reasons” he said, because it was English-speaking, its people are friendly, and its geographic location makes it easy to reach and technology is close by.

“Belize fits our goal of being willing to give back,” he concluded.

The corrective surgeries performed at KHMH, reflect the commitment of the Belize Spine Program to offer the best clinical and surgical solutions to the Belizean population.

The program also donated a “cell-saver machine that allows the collection and return of a patient’s own blood in cases where large amounts of blood loss are possible (and was used on the scoliosis case) which will remain at KHMH and is a donation valued at roughly $40,000USD.  Amedica donated instruments and implants valued at $100,000USD to the program.  Additional donations that benefit the Belizean population include cervical collars, a laminectomy set, additional instruments, and general supplies.”

The anonymous Belizean 13-year-old is only the first to benefit from the extraordinary generosity, magnanimity and grace of an entire corps of Belizeans and Americans determined to better lives. In his opening remarks Dr. Joel Cervantes described the overall effort as “huge” and “a dream come through”.

The team returns to action in February of next year and the current plans call for four units per year. Belizeans can access the program by visiting the neurosurgical care clinic Mondays and Wednesdays at the KHMH.

In a country where not only birth defects deform many but gun violence, road traffic accidents and poor construction have led to the trauma of paraplegias, there is hope that the halt and the lame may yet walk again, thanks to the Belize Spine Program.

Importance and Ease of Blood Donation