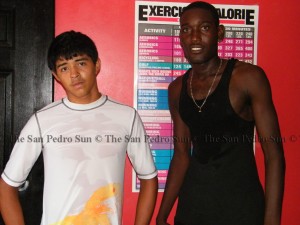 Three very athletic students from the San Pedro High School (SPHS) have been busy at work training for the up coming XVI Central American Scholars Games planned to be held in San Salvador, El Salvador September 4 – 14, 2011. The three athletes will form part of the delegation of 214 traveling to represent Belize.

The Belize delegation will be competing against participants from Guatemala, Honduras, Nicaragua, El Salvador, Costa Rica and Panama. A total of 1785 athletes, 892 male and 893 females, will be competing in 17 sports including such as Baseball, Chess, Long Jump, Basketball, Volleyball, Football, Judo, Karate Do, Wrestling, Athletics Swimming, Softball, Skating, Taekwondo, Tennis, Table Tennis and Triathlon among others.

Brandon Santos, 16 years old Senior at SPHS, Franklin Arana aka Dixon 17 years old graduate of SPHS and 14 year old Gian Rivero will be joining the Belize delegation. The boys have been busy training daily and thanks to the generosity of the Train Station, the boys have started weight training and taking advantage of all the equipment that the gym has to offer.

Brandon Santos has been competing for three years and earlier this year at the National Secondary School Sports Association (NSSSA) games, brought home four medals at the regional tournaments and three at the nationals.

Dixon travelled to El Salvador earlier this year where he garnered a silver medal for the triple jump, jumping 14 meters in the Central American Under 19 games.

Gian Rivero will be participating in the discus throw, while Brandon Santos is preparing for the 100 and 400 meter run and Dixon, the triple jump and 100 meter sprint.