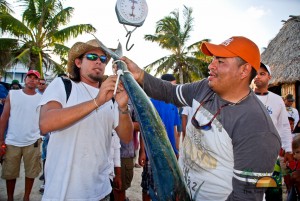 The sixth annual Dorado Rodeo Fishing Tournament was held on Saturday, May 5th at the Holiday Hotel. Anglers took to sea at daybreak, as early as 4:30am, to see who would reel in the catch of the day. At the end of the day, Christina, captained by Alberto Bradley was the winner of the $4,000 cash prize and named top boat.

The Dorado, also called Mahi-mahi or commonly known as the Dolphinfish, are known to congregate under floating objects and follow ships. This swift, fast-moving predator feeds on other fishes and squids. Their speed and size provide almost unequaled excitement and is the perfect challenge or extreme test for any type of fisherman.

Weigh-in time was at 6pm and boats began pulling into the weighing station at 5pm to see who would take home the prize. This year saw the participation of 19 boats in the tournament and after weighing was completed, the prizes and winners are as follows:

Top Boat went to Christina, captained by Alberto Bradley with a combined total of 38 lbs of Dorado winning the crew $4,000. Second place went to Reel Deel, Captained by Gilberto “Hillyboo” Lara with one 19 pound Dorado, taking home $1,500. Third place went to Ricky Marin onboard the Aaliyah Marlee, while Junior Angler went to Joshua Marin, also onboard the Aaliyah Marlee, winning them a total of $1,000 cash. Top female angler went to Jennifer Jimenez who caught an 18 pounder onboard the Christina and took home $500.

This year there was no winner for the first Calcutta, so the money will stay with the association and will be added to the next tournament’s Calcutta. The second Calcutta, however, went to Dilzon Murcia.

While the anglers were out fishing for the prized catch, Caprice Bar and Grill teamed up with Magic Touch Massage and the San Pedro Town Council to sponsor a Dorado Beach Volleyball Tournament. Always top cat in the sport of Beach Volleyball on the island, Gustavo Moratoya along with partner Ernesto Umaña took first place. Second place went to Irvin Chacon and Guillermo Rivero while Armando Escalon and Will Lima took third place.