The month of March saw the most overnight arrivals with 32,240 visitors, followed closely by December with 31,346 visitors. 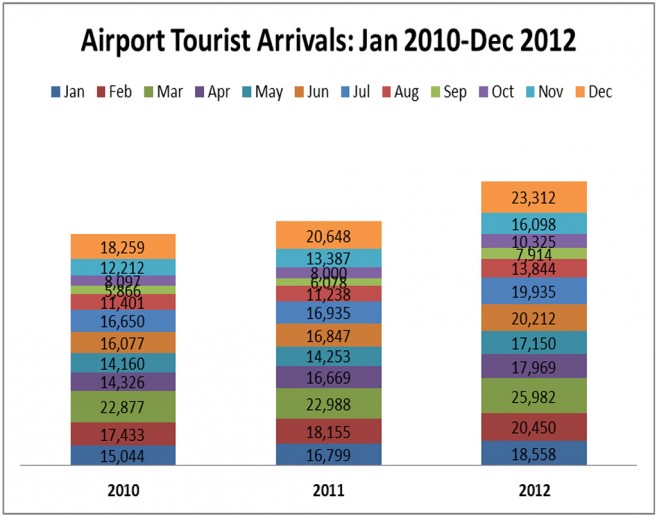 Although cruise arrivals have decreased by 12%, it still contributed an impressive 640,734 visitors to Belize for 2012. The year began with a 34.9% increase, compared to January 2011. February also saw a 24.4% increase, as well as July with a 9.6% increase. While the numbers were down for 2012, it was within reasonable cause, as Belize had less scheduled cruise calls for 2012. Heading into 2013, BTB has gotten assurances from cruise partners that Belize will see growth in the cruise industry.

In comparison to several of our regional competitors, Belize is doing extremely well, particularly for overnight tourism. From the table below, the final overnight tourism figures released for some of the Caribbean islands show change percentages as based on comparisons to the 2011 tourism year.

While Belize didn’t perform as impressively in the cruise tourism sector, the table below shows that cruise arrivals in the Caribbean have been a concern for many of our regional competitors.

The Belize Tourism Board wishes to extend hearty congratulations to all Belizeans, our partners and stakeholders. It is through continuous hard work, collaboration and dedication that we are able to achieve such impressive results. We look forward to an even greater year in 2013!