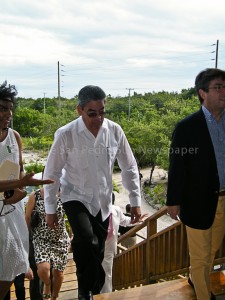 Bank Governors from Central America and the Dominican Republic are on Ambergirs Caye for the 26th meeting of Governors ahead of the annual Bank Governors meeting scheduled to take place in Montevideo, Uruguay. The meeting was declared open by acting Prime Minister of Belize Gaspar Vega following an official statement by the President of Inter-American Development Bank (IDB), Luis Alberto Moreno. The two-day meeting started today, Thursday February 9th at the Coco Beach Resort, located north of San Pedro Town.

In his official statement, Moreno explained that the IDB is proud of its 20-year partnership with Belize in the social and economical development of the country. Moreno said that, “Belize faces today, important social and economical challenges, but also has enormous development potential. It’s expansive borders invites Belizeans to explore the endless opportunities for greater commerce with neighboring countries and is reminded of the need of cross-border cooperation in matters crucial to development.” He continued that “despite the vulnerability and uncertainty amidst a complex world they remain focused on the possibility of economic crisis, something that affects everyone. However, they also look forward with optimism, hopeful that with the agreement reached through dialogue they can lessen any financial impact should it happen.”

While experts predict the possibility of an economic crisis in Europe, which can have serious implications on smaller regions, Moreno explained that the outlook for Latin America and the Caribbean appears positive. In 2011 the region registered production growth of 4.3 percent while Central American and the Dominican Republic showed growth of 3.8 percent. This is attributed to lessons learned in the past combined with over a decade of persistency by IDB that countries build and maintain a stronger economy. Moreno said that one of the main socio-political problems that need to be discussed and addressed is the area of rural development. “Despite the great agricultural potential in the region, the rural area has the largest number of people living in poverty. We have to work not only to improve the agricultural sector in these areas but improve the standards to have these products reach the international market. Tourism is another avenue that can be used to improve rural development and create employment opportunity,” said Moreno.

Moreno told the press that one of the main topics that will be discussed is the issue of crime in the region. According to Moreno, crime alone is costing the region 8% of GDP (gross domestic product) to combat and it’s something that is of concern. Moreno explained that other areas that will be discussed are regional integration. The delegates will also look at the opportunity to strengthen and grow the tourism sector and create solid structural reform. When questioned about the challenges faced in the region, Moreno explained that the main one is infrastructure which is important to connect the region in an effort to increase trade.

According to Moreno, during the meeting, they hope to listen to the shortcoming and challenges by country and will analyze which projects the IDB would focus on. “We cannot be the sole financier of all the country, we don’t have the capacity and it would not be good for any country,” explained Moreno. In the past 20 year Belize has enjoyed over US $200 million in total lending and Moreno explained that the loan interest rate is 1.5%. Belize has also received over US $20 million in grant funding.

As part of the meeting Belize also joined the Salud Mesoamerica 2015 Initiative of which the initiative’s first project will see Belize receiving US $250,000. The money will be used to help reduce maternal and infant mortality among the poor and will benefit over 30 thousand women.