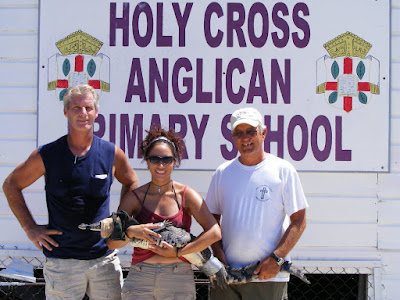 North of the cut on Ambergris Island, a five foot American Crocodile decided to take up residence in a shallow canal on the property of the managers of Holy Cross Anglican School, Francis and Vernon Wilson. Worried that the bold reptile would make a beloved pet its prey, the Wilson’s decided it needed to be removed. With the word out that a nuisance crocodile needed to be relocated, a few locals stopped by and offered to ‘off’ the cute little bugger for a price. Not wishing to harm the juvenile croc, the Wilson’s were put in contact with ACES / American Crocodile Education Sanctuary in Punta Gorda by wildlife advocate, Colette Kase. Being ACES is a non‐profit organization with limited funding, the Wilson’s graciously put the ACES’s Team up for the night, and the Holy Cross Anglican School donated funds to cover the costs of the crocodile’s relocation.

American Crocodiles are not only protected under the Belize Wildlife Protection Act (Chapter 220); but are also currently considered ‘Vulnerable’ by the International Union for the Conservation of Nature (IUCN) and on a global level are facing a high risk of extinction in the wild.
ACES’s Team, Behaviorist Vince Rose, Biologist Cherie Chenot‐Rose and UCLA, PhD research student Marisa Tellez, arrived on the scene Tuesday, August 4th , at lunchtime and was fed a yummy, complimentary meal by the Holy Cross School. Setting up traps in the hot day’s sun, the team caught the croc by 5:00 pm in a snare type trap; and then, collected scientific data pertinent to the conservation of Crocodilians in Belize.
The captured croc was a female and name Alice E. after Francis’s mother. In the species Crocodylus acutus, American Crocodiles, the female is the more aggressive. This particular croc had taken up residence in the Wilson’s canal because the contained water had a lower salinity than the surrounding canals.With fresher water to drink and ample food sources, from not only the birds and fish but from the nearby workers, the croc was protecting her little water hole with all she had. This was truly one of the feistiest little crocs I have ever encountered. And, even though this croc was successfully relocated to ACES in Punta Gorda where she will be used in educational lectures on how to safely co‐exist with crocs, another croc will most likely move into her now vacant water hole.
It is important to understand that removing all the problematic crocs is not an answer to Ambergris’s ever growing problem of human‐croc conflicts. The answer to coexisting with these modern day dinosaurs is to recognize it is us, humans, who are the intruder and we need them more than they need us. The number one thing everyone can do to decrease the number of problem crocodiles is never discard food waste, especially chicken and fish scraps, into the waters. Everyone enjoys a free meal and will choose it over paying or expending extra energy.
Feeding crocodiles directly or indirectly by this manner is the number one cause of croc attacks and is illegal in Belize.
If you have small pets or children and you are living on a canal or lagoon front, a sea wall will assure protection from crocodiles coming into your yard. At times of mating and when dry seasons are extra dry, crocs will seek waterholes with a lower salinity than the sea. Even though American Crocs are a saltwater species and can excrete salt through a specialized gland on their tongue and through their feces, high continual concentrations of salt can be stressful on them, especially the young and nesting females. Normally, these crocs will drink fresh water from the thin layer of rainwater that being less dense lays on the surface of the saltier sea. This year, with as dry as it has been, this layer at times does not exist and the crocs will seek out pools, puddles and contained water areas for their lower salinity.
ACES would like to thank Francis and Vernon for their hospitality and the Holy Cross Anglican School for funding the capture. We praise their decision in taking the extra mile to save this highly threatened apex predator. So many people do not seem to understand the importance of crocodiles in keeping Belize’s ecosystems in balance. Not only do they feed upon small mammals and rodents that carry disease, such as raccoons, but they keep fish populations in balance and healthy as well. By reducing the numbers of apex predators, such as crocs, in an area, populations of their prey explode. This in turn leads to spread of disease and famines as prey consume all of the available food sources. In turn, the prey will eventually die off in mass numbers and habitats that once flourished with life will become vast wastelands. With only an estimated 10 to 20 thousand American crocodiles left world‐wide, ACES is making every effort to help preserve these magnificent reptiles for Belize’s future generations and to hopefully save them from extinction.
For more information about ACES please visit our website at www.americancrocodilesanctuary.org.

Belize Mission Dental Project is back!