TV news footage shows suspects being seated in front of the hijacked plane on the tarmac at Mexico City’s airport. 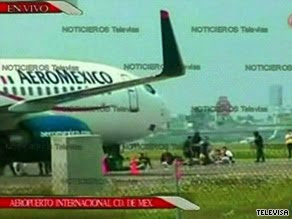 TV news footage shows suspects being seated in front of the hijacked plane on the tarmac at Mexico City’s airport.

The hijackers — possibly Bolivians or Colombians — took control of the Boeing 737 Aeromexico jet as it flew from the resort town of Cancun. They said a cardboard box they were carrying contained a bomb, which they threatened to blow up if their demand to speak to President Felipe Calderon was not met, CNN affiliate TV Azteca said.
The jet was moved to a remote area of the airport, and passengers were allowed to deplane; clutching their hand luggage, they walked slowly down the stairway to the tarmac.

Moments later, the suspects were taken into custody.

Waste water dumping upsets residents in San Juan
The Lodge at Chaa Creek; a touch of nature and a taste of the past and present

Wanted for the murder of Melvin Almendarez, Jordan Bacchus is arrested in Canada