Alpheus Parham
At around 5:20pm on May 9th 2010, P.C. #437, Alpheus Parham and a special constable responded to reports of a male person behaving in a disorderly manner at The Split area in Caye Caulker. As a result, a male person by the name of Alex Goff was detained and escorted to the Police Station.
Shortly after, a second incident occurred at the police station. Acting upon information received, the Police responded to the eastern cell block of the Caye Caulker Police Station where the lifeless body of a dark skinned male person was seen in a sitting position against the wall, suffering from what appeared to be a single gunshot wound to the forehead.
The body was later identified as one Alex Goff, 31, of #33 Mopan St., Belize City. Initial Investigation revealed that the victim was detained and escorted to the Caye Caulker police station where he was placed inside the cell block for disorderly conduct and assaulting a Police Officer. 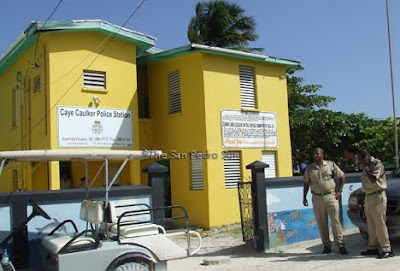 After Goff was placed inside the cell, he continued to make noise, and P.C. # 437 Alpheus Parham re-visited the cell block and began speaking to him. The diarist reported hearing a loud bang then immediately saw the officer exit the cell and placed a .38 revolver inside the diarist desk [drawer], subsequently the officer left the station.

The other officer on duty then made checks inside the cell where he reportedly saw the victim bleeding from what appeared to be a single gunshot wound to the forehead. The body was transported to K.H.M.H. where it awaits a post mortem. The .38 revolver has been recovered. As is customary when a shooting involves a police officer The Office of Internal Affairs and Discipline is conducting an intensive investigation. Officer Parham is detained pending charges.