While talks of a national garbage dumpsite are in motion, the future of San Pedro’s waste management program remains cloudy. In a press release published last week on News 7 Belize, the Solid Waste Management Authority is closing its current dumpsite on Mile 3 and creating a centralized storage unit for the majority of the nation’s trash. San Pedro’s garbage, which currently sits in a smoldering pile in the Mosquito Coast area, will be carried by barge and relocated to the new facility on Mile 24.The plan, while a step forward in environmental accountability, will take at least a year to begin. 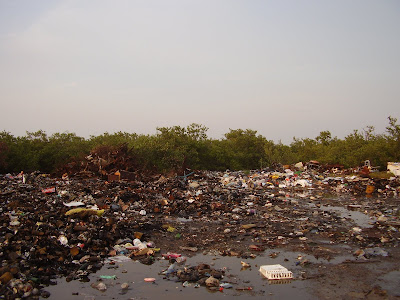 “It has been going on for a while. I think from the previous government and they’re still going,” says Nano Guerrero, San Pedro Town Council’s Director of Waste Management and Health. “Apparently, this coming year things should be starting to move.” As nice as the prospects of a transfer depot for barge service may be, the current method of waste management on the island presents a mess that needs to be addressed on a wider scope, especially since there is no town solicited collection service north of Palapa Bar. “When you’re talking about the northern part, well that’s a different story. I think they do their own and burn it. Some of them bring part of it but some of them still burn part of their garbage,” says Mr. Guerrero. Town Council has lobbied to see an effective northern road subsidized by the GOB, but the process has been slow.

Besides this disconnect between Government and San Pedro Town Council, many environmental concerns exist. Burning trash in uncontained spaces causes irreparable biological harm. Even though little study has been conducted on the dumpsite’s ecological footprint, there is much speculation on the long-term effects of the dump’s synthetic depository.

Miguel Alamilla, Biologist & Manager of Hol Chan Marine Reserve, is conscious of the adverse effects caused by biological amplification surrounding the dump. “What happens is the plants would absorb those chemicals and make it part of their system,” says Alamilla. “The herbivores would come and feed on that which would be bacteria or small fish, and those are preyed upon by larger animals on the food chain. As you go up [the food chain] those persistent chemicals are amplified.” 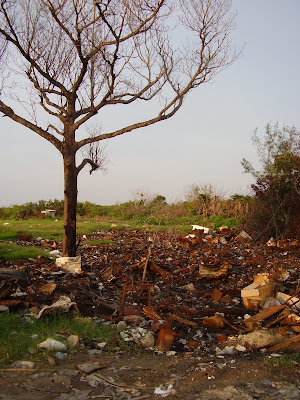 Additional to the wildlife, the surrounding citizens face risk from the smoke. Efraim Bardalez, a general contractor working on a construction site south of the dump, is aware of the hazards posed by the San Pedro dumpsite. “Where I’m working if there’s smoke blowing [from the dump] we have to quit working,” says Bardalez. Even though the smoke usually blows west, changing winds carry the smell of garbage to residential areas. The wafting smoke towards luxury resorts and residential developments threatens San Pedro’s image as a slice of pristine paradise – the island’s top selling point for foreign clients. “Sometimes you get some complaints about the garbage especially when the wind shifts. When they burn the thing you know all the smoke comes in to the area,” says Guerrero. “It’s very rare when it comes closer to town. [It’s] more on the hotels in the south when the [wind] shifts from the north.”

The exponential population growth on the island in recent years is one of the reasons why the waste management program is difficult to regulate. New developments open the doors for foreign workers and retirees alike. Expansion has strained the Town Council’s waste removal services and the town’s fleet of five trucks circle every day from three in the morning till night. Often, there is not enough time to empty San Pedro’s many trashcans and dumpsters. Without any separation of the organic, inorganic, and recyclable the island’s waste management program must undergo a dramatic facelift in policy. Separating the trash is an expensive endeavor that requires education for all citizens. This will take time to implement and an increased effort and awareness for all. With years of little-to-no separation, creating the habit will suffer from growing pains. “There’s no separation. Everything goes in the dump,” says Mr. Guerrero. “They have no other options I guess.”