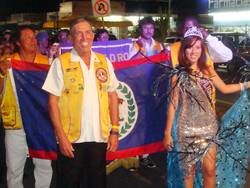 A delegation from the Belize Lions Zone 59 travelled to the neighboring City of Chetumal Mexico. The delegation participated in several activities planned as part of the agenda for the Mexico Multiple District B-8 Lions Cabinet meeting which took place over the weekend. The event started on Friday evening with a special mass at the Roman Catholic Church of Sagrado Corazon de Jesus. Immediately after the mass, the Belize delegation, accompanied by the Zone Queen, Ivy Allamilla participated in the cultural parade through the principal streets of Chetumal. The parade ended at the Lions Den where the Lions from Belize Zone 59 joined their fellow lions from the Mexican states of Oaxaca, Chiapas, Tabasco, Campeche, Yucatan and Quintana Roo in a welcome supper and dance.

Activities continued on Saturday where the Mayor of Othon P. Blanco – Chetumal, Andres Ruiz Morcillo hosted the clubs to a typical open air Mestizo breakfast next to the Palacio Municipal. The breakfast included a variety of Mexican tacos and flavored “agua fresca.” There, Mayor Morcillo highlighted the good work of the Lions Organization worldwide as well as locally. He also took the opportunity to invite the Lion members and their family to visit and tour the beautiful state of Quintana Roo. In addressing the gathering, Mayor Morcillo highlighted the ties that both Mexico and Belize enjoys and took the opportunity to congratulate the clubs from both countries for working together in serving their people and communities under one banner “The Lions Organization.”

At the ceremony, Mayor Morcillo was honored by the Lions Organization for his and the city’s support towards the work of Lions Organization. For its part, the President of the Chetumal Lions Club, Josephina Gonzalez Perera recognized each clubs that was represented at the functions and stated that they were extremely happy for the special attendance of the Belize delegation. President Perera aslo honored individual clubs with a special certificate of participation. The Belize delegation also handed gifts to high ranking officials of the Lions Organization of Mexico. Gifts were handed by Zone Queen Ivy Alamilla to the President Josephina Perera of the Chetumal Lions Club, David Jimenez Lopez who is the Governor of the Mexico Lion District B 8 and Joel Rosendo Gomez Franco who is the National President of the Council of Governors. During the official Cabinet meeting, Chairman of the Belize Lions Zone 59 Baldemar Graniel was amongst the delegation that assisted various business meetings. In the meeting critical issues were discusses including commitment of growing the organization worldwide as well as club reports. The other members got the opportunity to visit the Cultural Museum of Chetumal and tour Bacalar; a small community that sits next to Siety Colores Lagoon. The event ended with a dance in honor of the queens at the Holiday Inn where the maximum authorities of the Mexico Multiple District B 8 and Belize Zone 59 both exchange country flags.

During the closure of the event, Lion member Alfonso Plazuelos Mascareno of the Chetumal Lions Club was honored by the National President of the Council of Governors for his over 35 years of outstanding lifetime dedication to the Lions Organization.

Some 30 Belizeans participated in the event and included Lion members from San Pedro and Belize City. As a direct benefit from Belize’s participation a high delegation from Lions Organization in Mexico will be in Belize for a two days visit on November 28th and 29th where they will participate in the Belmopan Lions Club anniversary activities and the Lions Cabinet meeting. The high level delegation will be headed by the National President of the Council of Governors of Mexican Lions David Jimenez Lopez.