Earlier this year BTB (Belize Tourism Board) along with the Ministry of Tourism hosted meetings in both San Pedro and Caye Caulker. At these meetings, presentations on the work being carried out by the Sustainable Tourism Project as well as the Tourism Police Units (TPU) were held, and concerns were noted as well.

In San Pedro, community members expressed two main concerns, one regarding the need to equip the TPU officers with adequate resources for them to be able to efficiently perform their duties, and the other, constant reports of corruption within the TPU. Ambergris Caye’s sister island Caye Caulker also expressed similar concerns regarding the TPU.

Consequent to those meetings and concerns, the Minister and his team planned and implemented key solutions that they hope will alleviate the problems encountered by both islands as well as provide adequate security and safety to residents and visitors as well.
On Wednesday August 24th, community meetings were held in both San Pedro and Caye Caulker to present the improvements to be made within the TPU. Both meetings were well attended by concerned community members as well as representatives of the BTB, Ministry of Tourism, police, TPU, local government and members of the press. 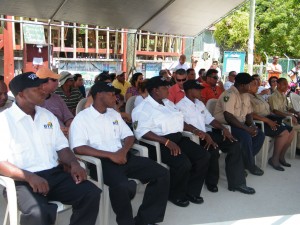 To address the concerns in Caye Caulker, a variety of changes were made. To start with, the amount of TPU officers will increase from three to five and they will work closely with Caye Caulker’s ten police officers. In the past, transportation was a problem for the officers as they only had four bicycles to use for patrolling. The TPU just received two new bicycles to add to their fleet as well as a brand new 125CC motor bike. With the addition of this vehicle, Caye Caulker’s TPU will lessen the time it takes to cover designated areas. They will also be receiving hand held radios to assist in communications.

Topping this off is the renovated and re-opened TPU booth. The booth had been closed and was re-opened on August 24th and now has a new telephone line, computer and potable water. During the meeting, the gathering was addressed by Hon. Manuel Heredia, Jr., Mr. Alberto Villanueva and Mr. Jim Scott. 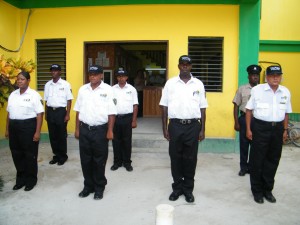 Following this, the delegation moved to San Pedro for a similar presentation where they were joined by Mayor Elsa Paz, current members of the San Pedro Town Council, members for the United Democratic Party’s slate for the up coming Municipal Elections, ASP Arnold, members of the San Pedro Police Department and community members. Ms. Seleni Matus stated that the improvements made in San Pedro, Ambergris Caye were much more stringent as a result of the gravity of the complaints, especially regarding the corruption of officers. To begin with the five original officers in San Pedro have been replaced with four new officers, one of which is senior officer, Corporal Sharmane Young. Young is tasked with keeping all the officers on both islands in order.

In an effort to alleviate the strain of transportation on the island, the new team has been equipped with one new golf cart, two new bicycles and a refurbished all-terrain-vehicle. Realizing the rapid growth of the island, especially in Northern Ambergris Caye, the officers will be covering more grounds, spanning far north and south of the island. The San Pedro TPU will also be provided with accommodations specifically for the unit. Further to this, the North Ambergris Caye Police Sub Station has been re-opened. 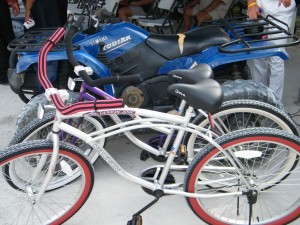 On both islands, the TPU’s patrol schedules have been modified to maintain a morning and evening shift. Much effort is being put into place to increase patrol along the beaches of both San Pedro and Caye Caulker. Further to these efforts, Belize, has become a member of SICA (Central American System of Integration) and has agreed to comply with the request of SICA to as a region, have all TPU’s officers uniforms carry one singular color, white. As a result, all TPU Officers will be sporting white uniform shirts with black slacks.

In conclusion, Hon. Heredia stated; “As I come to a close, I find it imperative to point out that these changes are only but the first steps in a much larger plan as it pertains to ensuring the optimal environment for tourists, Belizeans who work within the tourism industry, and the entire San Pedro and Caye Caulker communities. It also shows that we, as a forward-moving government, are serious about listening to the valid concerns of the Belizean people and making changes accordingly”.

Following both presentations, attendees were invited to a short social where food and drinks were provided.