Home » Community and Society » Politics and Government » Central Park: Are the renovations completed?

The beautification of San Pedro with the ultimate goal to increase tourism influx has been, and continues to be at the forefront of just about every island politician’s campaign. One such project was promised several years ago and the question remains, was that project ever completed?

The project we are taking into consideration in this week’s issue of The San Pedro Sun is the renovation of the Central Park. The old Central Park, as many may recall, was the meeting place for families, friends and sport enthusiasts, as well as the venue for most of the island’s many festivities. There were concrete bleachers providing seating for well over two hundred individuals at any given moment, a basketball court, individual vendor stalls and a stage.

The first plan for a renovation of Central Park was presented to the community in October of 2003. This was a joint venture by Her Worship Mayor Elsa Paz and Area Representative Hon. Mr. Manuel Heredia Jr. The plans for the new park covered an area from beachfront at Atlantic Bank to the north side of the San Pedro Roman Catholic Church. It stretched from the sea, west to Barrier Reef Drive and included part of Ambergris Street.

The plans would permanently block a portion of Barrier Reef Drive to all vehicular traffic. Vendor booths were to be relocated to the old football field which would double as a municipal parking area. The entire ground area of the park was to be paved with cobble stone bricks. 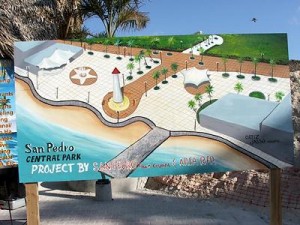 While the project was expected to commence in January of 2004, it wasn’t until 2006 that the project actually began. A beautiful artist’s rendition of the new park was prominently displayed at the site, showcasing new park benches, lights, water fountains, trees and plants, etc., that would be placed strategically in and around the park, while at the south side a larger, state-of-the-art stage would be built. On the beachfront, opposite Ambergris Street, a lighthouse would be constructed and the municipal pier transformed into a water taxi terminal. Once the deconstruction of the park was underway the community voiced concern about the project and there was much public comment against it. In its defense, the Mayor lobbied hard for the beautification project and used the artist’s rendition to demonstrate what the public had to look forward to when the project was complete.

The estimated cost of the project was close to $2 million. Aside from San Pedro Town Council funds, large monetary donations were to be collected from the business community to cover a portion of the total cost.

So far all that is apparent in these renovations is the cobble stoned area and park benches. Where are the fountains, state-of-the-art-stage, lighthouse, water taxi terminal? The San Pedro Sun met with Mayor Elsa Paz to discuss the Central Park, as well as her portfolio, the council’s accomplishments and so forth, which we will publish in next week’s issue. 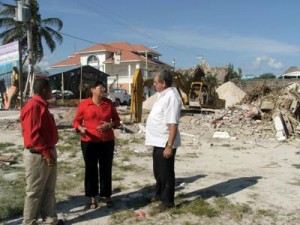 In regards to the Central Park, Mayor Paz stated; “It’s finished, it’s completed. The initial plan called for a water fountain, which we had but it didn’t work for the purpose we intended. Because of the winds, it used to cause lots of people to get wet; as a result we decided to move it. Now, as for the stage, well, we bought a stage instead. We decided that instead of building a concrete stage that would have to be there permanently, it was worth it to invest the $48,000 that we did, in a stage that could be moved. Lots of the town’s events do not happen at the Central Park, in fact, right now that stage is being used even by the Costa Maya Festival. We thought that it was a better investment. As for the Lighthouse, we decided that whenever we repair that main dock we were going to put it at the end instead of in the park itself. There were plans to repair the municipal dock and make it part of the Central Park complete with landscaping, but we couldn’t manage to go ahead and do it because the quotation was too high. That would have needed additional funding which would be provided by the Town Council, but wasn’t possible due to insufficient money.”

While the Mayor states that the park promised was the park delivered, she added that it is the hope of the Council to add to the Central Park. A town clock is planned to take the place of the proposed lighthouse. The town clock would be located on Barrier Reef Drive in the area where Ambergris Street meets Barrier Reef Drive. While this was not in the original plan for the park, the Mayor stated that it will add to the beauty of the park as well as assist in controlling heavy traffic on the front street. Ramon’s Village has expressed interests in sponsoring the clock. Mayor Paz hopes that this is a project that she will be able to see completed shortly.

Our interview took a look at the pledges made under the leadership of Mayor Paz in her last election as well as their accomplishments in the nine years of being in office. Look for next week’s issue of The San Pedro Sun where we will go into details about that interview.