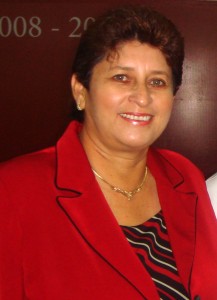 The San Pedro Mayor, Her Worship Elsa Paz, seemed to be in the spot light this week when The San Pedro Sun was privy to information leaked from the Town Council, compounded with complaints made to The Sun by local business owners regarding a possible extortion scam. In an interview with The Sun, Mayor Paz tackled the tough questions and explained why things have been done in a certain way during the last few weeks.

One of the first things the Mayor addressed was the questions related to the renewal of the employment contract for SP Town Council Administrator, Patricia Verde Tillett. Mayor Paz confirmed that indeed Tillett’s contract was renewed. “The contract was renewed in November,” said Mayor Paz, adding that the decision was put to a vote to the council and the majority voted in favor to have the contract renewed. When asked why the council moved to renew Tillett’s contract for a three year term considering that the council has virtually less than two months more to govern, Mayor Paz stated, “That is the reason why I didn’t want to sign it [the contract] and wanted other councilors to sign it as well…it has been a policy for years, since the PUP days, to renew the contract on a three year term.” Mayor Paz said that whoever becomes the next Mayor of San Pedro may choose to terminate Tillett’s contract. Under the agreed terms in the contract however, a severance would have to be honored.

Mayor Paz also addressed concerns relating to bonuses given at the end of the calendar year to office workers and supervisors at the council. According to Paz, bonuses are calculated based on the years of service. “If you have one to five years working, then you are given a bonus equivalent to one week’s salary, five to ten years get two weeks and so on,” explained the Mayor. When questioned whether there was any truth to the allegation that Tillett’s bonus exceeds $6,000. Mayor Paz responded, “The administrator is in the bracket of five to ten years service so she should receive a bonus equivalent to two week’s salary; she is the best paid employee at the council.” Mayor Paz noted that Tillett’s weekly salary is a little less than $1,000 a week, before taxes. The issue of bonuses is a sore subject with the town sanitation workers who apparently do not qualify for the end-of-year monetary gift. Not only are these essential workers denied a bonus, they have apparently been asking for a raise in salary for years. In addressing this issue, Mayor Paz said, “We are having a meeting and in that meeting we will discuss the issue of a raise. We will consider a lot of the employees who have been with us for a long time in getting an increase in salary. They have been asking for an increase but it all depends on our budget too.” 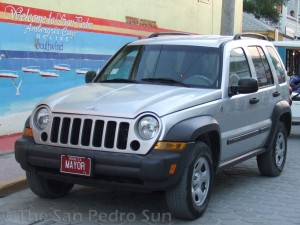 What was also brought to The Sun’s attention by an employee of the Council was the way in which the SP Council acquired a vehicle belonging to the Mayor. According to Mayor Paz, since her term in office is ending, and given the fact that her vehicle was imported to the country duty free, she decided to sell her personal vehicle to the council. “I sold it to the council because it will remain duty free and because the council needs it,” said Mayor Paz. Mayor Paz said that during the two years that she owned the vehicle, regular maintenance repairs were covered by the Council. While she did not disclose the actual amount paid for the vehicle, Mayor Paz said, “I did not over price the vehicle. I sold it for the same price that I got it for and I had it for two years.” As for a personal driver, Mayor Paz indicated that she only uses a driver when she travels to the mainland. She is currently using Germain Tillett, husband of the Town Council Administrator, as her personal driver for which he is paid $75 a day when his services are used.

The Sun has also received complaints from several businesspeople claiming that they have been extorted money for work and building permits by one of the nephews of the Mayor who is reportedly working on her behalf. “I have heard it too and it is not true. I have spoken to my nephew and I have asked him to stop using my name. If anyone does not present an official letter from the Council or on my behalf, business people should not listen to anyone using my name,” explained the Mayor.

Mayor Paz was also questioned regarding serious allegations of the destruction of public documents in light of the town council election. Mayor Paz denied those allegations and explained that documents are safeguarded for a period of five years as mandated by the Ministry of Local Government after which it is in the Council’s discretion to choose to destroy them after that period. Mayor Paz ended her interview by stating that the Town Council public meeting planned for December was rescheduled for January pending the completion of several projects before her term of office ends in March, 2012.