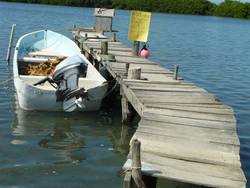 For months now, the Saca Chispas Beautification Project has been a project directly linked with the main stakeholders (individuals whose immediate residence would be directly affected by the project), representatives from the Sustainable Tourism Program (STP), Minister of Tourism, Hon Manuel Heredia, the Belize Tourism Board and the International Development Bank (IDB) – Funders of the project.

However, after many unsuccessful consultations at the stakeholders meeting, it has been decided that the project will be taken to the community of San Pedro for a vote. The original proposal for the project was met with strong opposition in its initial phase. After designers went back to the drawing board, altering the design to suit the needs of the main stakeholders, a presentation was made and once again, it was met with strong opposition.

On Wednesday January 26th a meeting was called by the stakeholders to which, Mayor Elsa Paz and Hon Manuel Heredia Jr. were invited. This was after several meetings were held within the stakeholders. At this meeting the Mayor expressed her position on the project and expressed her support for both stakeholders in their concerns, as well as for the project which would benefit the general population of San Pedro. Minister Manuel Heredia assured the attendees that their issues have been and will continue to be addressed. Once again, stakeholders shut down the project and the majority had a negative feedback. The general consensus, “we do not want it”.

The San Pedro Sun contacted both Hon Manuel Heredia and the Mayor Elsa Paz for a follow up to the January 26th meeting as well as to find out what the public should expect to happen with the project. Hon. Manuel Heredia informed The Sun that he will be meeting with representatives from the IDB and the STP in an attempt to decipher where to go with the project. Further comments, he declined to make.

In an interview with Mayor Elsa Paz, she informed The Sun,

“I know that the people from IDB have been coming to the island for public consultations. What I see from the reaction of the people, the private sector that have property right in front of where the project will be, has been very negative as they have objected strongly to the project.”

The reasons for their objections vary. Some people feel that the project will interfere with their livelihood, others believe that it will deprive the island of what many would consider the last piece of history that serves as a reminder as to where San Pedro began. There are also concerns about existing structures and compensation to name a few. The Mayor had explained in a previous meeting that the project would be willing to issue 25-year leases to everyone that owns an existing dock, to a re-constructed dock which would form part of the project. This also was met with objection.

She continued to explain,

The Mayor went on to explain that she has committed to not backing any project that would see the need for removal of any resident of western San Pedro Town. She maintains that the project is not a project geared at a particular group but rather a Tourism Project which, in the longer run would benefit San Pedro in a whole.

The Mayor informed The Sun that today, Thursday February 3rd a meeting will be held which will see the participation of Hon Manuel Heredia. The main item on the agenda will be discussing a date for which a meeting will be held where the general public will have an opportunity to weigh in on the decision as to whether the Saca Chispas Beautification project should become a reality.

Item of note is should this project not go through, the funding would be lost for the island.