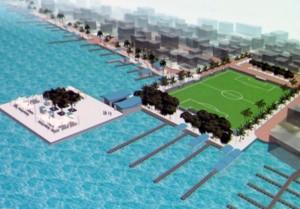 Since 2009, there have been several debates over the controversial Saca Chispas boardwalk and Water Taxi Terminal project proposed for the fishing dock lagoon side of San Pedro. The project has the full support of the Area Representative and Minister of Tourism Hon Manuel Heredia and several key stakeholders in the tourism industry. Just before the general elections in March 2012, it was announced that the project was scheduled to proceed in April. As it stands now, the project is awaiting ratification from the National Assembly before work starts.

In an exclusive interview with Heredia, he explained to The San Pedro Sun that he hopes that the project can be tabled at the next sitting of the House of Representative and get the nods from the National Assembly. By law, all projects in excess of $5 million need to be ratified by both the Lower and Upper Houses of the National Assembly. The Saca Chispa Project, as it is referred to by islanders, is expected to cost some $5.6 million and is being finance through a 20-year loan from the Inter-American Development Bank (IDB). The project is one of several being implemented in different parts of the country under the National Sustainable Tourism Program in which the government borrowed some $30 million from the IDB.

According to Heredia the bidding process was completed and the project has been awarded to contractor Rommel Berges of RJP Construction but contracts are yet to be signed pending approval from the National Assembly. Since the swearing in of the National Assembly there has been no other sitting of the House of Representatives. It is expected that the Saca Chispa project will be included in the delayed Revenue and Appropriation Bill 2012/2013 (the annual budget). There has been no indication when such bill will be taken to the National Assembly, but because the fiscal year ended on March 31st, it is likely that the Prime Minister of Belize, Rt. Hon. Dean Barrow, will do so no later than the end of May.

Social Media Detail now a request for US Visa Application