San Pedro’s annual Wahoo Challenge, organized by Henry Beissner was hosted at the Tackle Box on Saturday, January 7th. The fishing tournament invites the participation of local and international fisher folks to compete and is held annually during a period that coincides with the peak of the Wahoo feeding season. 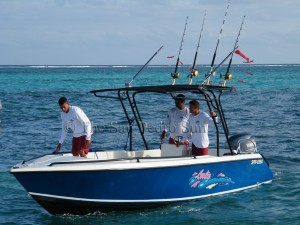 Anglers took to the waters at daybreak on Saturday for a fun day of intense fishing. The Wahoo did not disappoint, with 27 fish caught. Weigh in started at 4pm and went through to 5pm. The combined weight of the two heaviest Wahoo caught by each boat determines who the winners are. A total of twelve boats participated and at the end, the winners were as follows.

Second place went to Mr. Leslie with crew members Martin Leslie, Jody Leslie, and Irvin Chacon. They caught 78lbs of Wahoo. For second place, they took home $1,500 and a crystal trophy. The biggest Wahoo was caught by Christopher Kuylen Jr. and weighed in at 44 lbs. For this, he won $500 and a crystal trophy. Christopher also took home the $500 cash prize for being the Top Junior Angle.

The Top Calcutta went to Mad Storm, with crew Adrian Heusner, Gary Grief, Cheto Guerrero Sr. and Stefan Musa, with a total weight of Wahoo caught of 269lbs. For this, they took home $2,040. The second place Calcutta went to Hang Man which took home $1,020 for catching 177lbs of Wahoo.

Persons traveling to Chetumal by boat question $25US fee5 Photos