On Saturday, January 14th the San Pedrito area saw the inauguration of their long awaited park. The San Pedrito Sub Division, created in the early 1990’s with limited neighborhood planning, has grown into a thriving community. Complete with fast food restaurants, convenience stores and bars, the brand new park is a welcome addition to the area. Thanks to efforts of residents, the San Pedro Town Council and the Hon. Manuel Heredia Jr, the park is now a reality.

The final project presented to the enthusiastic children and residents of San Pedrito was a beautifully, well lit playground complete with palapa, picnic tables, plants, playground and seating area for parents and guardians.

The San Pedrito Park was originally envisioned in early 2010 by the UDP administration, but the project was apparently abandoned. In an earlier story published in Volume 21 Issue 13 of The San Pedro Sun, part time resident and investor in San Pedro, Faye Mounteer informed The Sun of her efforts to re-start the project. Her efforts were initiated after purchasing a rental unit that sits in front of the proposed park lot that was sitting vacant and was apparently being used as the local dumpsite.

With a little push, the San Pedro Town Council was onboard and after three years, the removal of hazardous garbage material and a collaborative effort of all involved, the park became a reality.

The short ceremony commenced at 8PM with a welcome address given by Her Lordship Mayor Elsa Paz, followed by a Keynote Speech given by the Hon. Manuel Heredia Jr. Both stressed the importance of having such a venue for the children of San Pedrito. 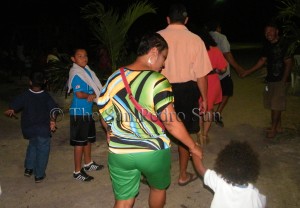 They encouraged residents to take on the responsibility of maintaining the park for their children and future generations. Further to this, both individuals took the opportunity to request continued support from the residents of San Pedrito for the UDP regime. The vote of thanks was given by deputy mayor Severo Guerrero.

Following the cutting of the ribbon, attendees were invited to snacks and drinks provided courtesy of Mayor Elsa Paz and the San Pedro Town Council. Entertainment was provided by Rompe Raja.