Thawing out the frozen T-shirts proved to be quite the challenge.

The super fun and very entertaining competition began with the teams thawing out a block of frozen T-shirts. The teams were not allowed to use water during the challenge and it proved to be a tough one. In the end Daddy’s Little Swimmers were the first to complete the chilly task, putting them in the lead.

The second challenge was a water relay with the teams having to swim an inflated beach ball the length of the pool to each other. Some were quite clever in pushing the ball under their T- shirts or even bikini bottoms to transport the ball while swimming. It was a very competitive relay with the Mighty Jaguars

Some clever relay racers carried the beach ball inside their shirts.

winning the challenge. The third challenge was the Sponge relay where the team members had to pass a water saturated sponge over and under their line-up squeezing the water into a bucket at the end of the line. The first team to fill their bucket won and Fantiki Four took the game, placing all teams at an even status.

The Water Balloon toss proved to be great fun, with Fantiki Four winning again. Next came the greatly anticipated Cannonball contest, where team members had the opportunity to show off their splashy personalities! 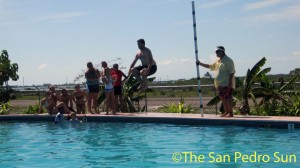 Teams became quite creative in building human platforms in order to gain a height advantage when bombing into the water. The judges used a measuring pole to gauge the height of the splash, but also took into consideration the form and creativity of the jumper. With lots of laughs and friendly bantering, Marty O’Farrell of the Fantiki Four was the only one to score a perfect 10 cannonball. This maintained his team’s overall lead in the competition.

The final challenge was the Sunken Treasure Hunt, where team members took turns finding a variety of items that had been randomly thrown into the very large pool. Armed with snorkel masks, it took the teams several minutes to locate the sunken items. Again the Fantiki Four reigned victorious in the challenge.

After a afternoon of good, clean fun the Fantiki Four won the challenge and were awarded with a bottle of wine. Second place team, 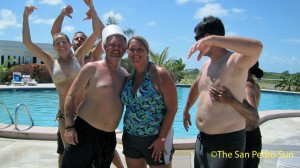 Friendly, fun competition at its best!

Daddy’s Little Swimmers were awarded with little pocket knives and they graciously gave two of them to the younger Fantiki Four contestants. All participants were also treated to a shot of their choice.

The day was a grand success with much fun, laughter and friendly competition. The next Water Olympics Challenge is tentatively scheduled for Saturday, April 21st. For more information and to sign your team up please contact Rob at 670-8001.