UNICEF official meet with SPTC and visit areas in need


On Tuesday April 17th, the San Pedro Town Council (SPTC) received the visit of two officials from the United Nations Children’s Fund (UNICEF). The team of two, headed by the UNICEF Country Representative Christine Norton met in private with Mayor Daniel “Danny” Guerrero. After the meeting, the Mayor took the UNICEF representatives to tour the San Mateo community and other deprived areas of San Pedro Town. The main purpose of the visit is to reiterate UNICEF’s available support to the newly elected councils across the country including the SPTC. It also serves to look at ways that UNICEF can assist some of the initiatives within the community that target children and falls under the organization’s program dealing with the monitoring of children’s rights in Belize. 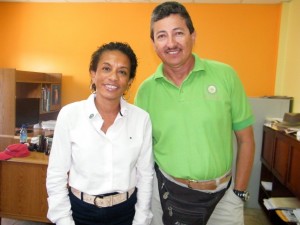 Speaking at a joint briefing to the media, Mayor Guerrero explained that the council is happy to have received the visit of UNICEF representatives. “As I have been saying, a number of our youth in our community is going the wrong direction… the children play a major role in any society, in any community, and in the country, so we are happy for the visit, which comes at a perfect timing when we are doing a lot of positive things in our town,” said Mayor Guerrero. The Mayor said that issues such as children being on the streets late at night to early morning, children using obscene words and even selling drugs, are some of the things he hopes can be addressed by the council with the support of other organization such as UNICEF.

When asked how they planned to move forward with dealing with children being in the streets late at night and involved in illegal activities, Mayor Guerrero explained that he hopes to get the relevant authorities as well as the government to support a curfew for children. While there have been reports of child prostitution on Ambergris, Mayor Guerrero stated that the issue is new to him. For UNICEF representative Christine Norton, those reports “raise a red flag,” but substantial evidence needs to show that indeed it is happening within the community. Along with looking at the issues affecting the livelihood and safety of children in the community, Mayor Guerrero says that another aspect of addressing the problem is to create more recreational activities. Activities such as sporting activities, improving the playground at the parks and the construction of a youth center that will be utilized for various activities such as a musical school are just a few ways that Mayor Guerrero hopes the council can offer alternatives to the young at-risk population. 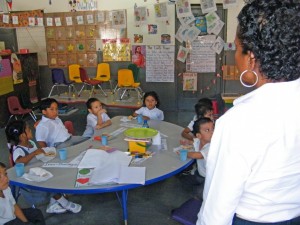 Norton was also asked to comment on the issue of the lack of classroom facilities for children who are unable to attend primary and secondary school, something that goes against “the right for an equal opportunity to an education.”  Norton said that while the lack of classroom space is “clearly a challenge,” UNICEF is aware that the government is trying its best to address the situation. Norton encouraged the council and the community to ensure that kids have access to education but to “look at education in a broader picture at both education and learning,” where “learning can happen at home, in the community or other available facilities.” According to Norton, such options are not limited to a formal academic education but one that can build skills through different out-of-school activities, sporting development skills and even musical training that “disadvantaged children” would not have access to. While UNICEF’s main focus is to help “disadvantaged children,” they support activities that can help address those issues. Norton said that one of the ideas they will be looking at is the Mayor’s proposal to build a music school which will help alleviate the shortage of space for children at school. The monitoring visit of UNICEF on the island coincides with SPTC’s official visit to the different schools, something Norton said is “the right move” in trying to understand some of the challenges that affect the children and also look at some of the positive things they are engaged in.

The UNICEF officials also took the opportunity to visit deprived areas of San Pedro to have a firsthand look at some of the conditions children are exposed to. The visit helped to determine what some of the issues affecting the community are. Officials evaluated the areas and will explore ways to secure help to alleviate some of the social problems that they saw which eventually trickle down to the children.

Mayor Guerrero says that the meeting will open the avenue for “positive” dialogue, which can be very helpful in putting solutions in place to some of the social problems affecting young people and children in the community. UNICEF officials will be frequenting San Pedro to conduct more monitoring visits and see if there is any progress made in the areas identified as needing attention.