Lions from all over Belize convened in Belize City to celebrate the Zone 59 34th annual convention held from Friday April 20th to Sunday April 22nd. Celebrated under the theme “Lions: Sharing the Gift of Serving,” the convention was a tribute to Lion Edilberto ‘Betito’ Marin of the San Pedro Lions Club. The convention was packed with several activities that were spread across three days of meetings and camaraderie. Amongst the participating clubs was the San Pedro Lions Club which managed to bring home the top three awards at the convention. 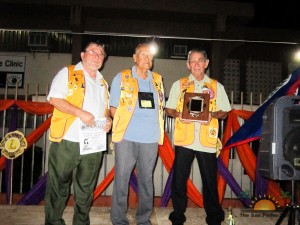 The first day of the event saw the opening ceremony and booth presentations from each club. At the start of the official opening ceremony, the 34th Annual Convention was dedicated to long standing Lion member Betito Marin. Lion Marin has been a founding and chartered member of the San Pedro Lions Club which was established in 1975. Since then, he has held several positions at many levels including Governor of District 59 which was renamed Zone 59. Lion Betito, as he is referred to by fellow Lions of Belize, has travelled all over the world on behalf of the San Pedro Lions Club, including China where the SP Lions was recognized as the Club of the year in 2005. Among the many awards bestowed upon Lion Betito was the prestigious Melvin Jones Fellow (MJF) award in memory of international founder of Lionism. The tribute to Lion Betito is historic and a special one for him and his family. Lion Belito, who is no longer an active member due to health problems, travelled to Belize City along with his family to receive the tribute. In a standing ovation, his long time colleague and close friend Lion Pedro Salazar Sr. read the tribute while a plaque of dedication was delivered to him by Lion Alberto ‘Beto’ Mahler.  After a short ceremony which included addresses by the Mayor of Belize City Darrel Bradley and Belize Council for the Visually Impaired (BCVI) Joan Musa, those in attendance enjoyed a variety of food offered from the different clubs at the booth presentation. 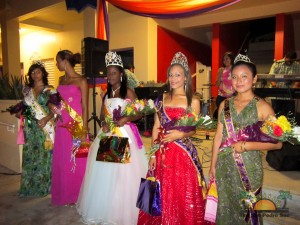 On Saturday, there were seminars and lectures geared at improving the clubs. Presenters included past District Governors, Zone Chairmen and MJFs Lions Alberto Mahler, Leonides Cuellar and John Wongsam.   The seminars were well attended by the members who were actively engaged in the discussions. Following the seminars, the election of a new Zone Chair and Vice Chairperson was conducted. After nominations and the election process, Lion John Wongsam of Belize City was unanimously voted as Zone 59 Chairman and similarly Lion Melanie ‘Mel’ Paz was elected as Zone Vice-Chair. Both will serve in two of the highest position in Zone 59 for the year 2012/2013 after which Paz will be elevated as Zone Chair as mandated by Lions International and they will be installed at a date yet to be announced.  During the course of the day, Lions as well as Leos were involved in tree planting in various areas including the Lions Park in the Southside area of Belize City. During the course of the night, Belize City Lions Queen Vanessa Moss was crowned as the new Zone 59 Queen.

On Sunday morning, Lions members attended a special mass at the Saint Joseph Church after which a parade followed through Belize City. The parade ended at the Lester Young Lions Building grounds for closing ceremonies. During the ceremonies awards were handed out to the winners of the best Club Booth, Float and Parade competition. The SP Lions Club brought home first place in all three categories while Belize City Lions Club captured second in both the parade and float competitions. San Estevan Lions Club captured second in the booth completion.

In other Lions news, during their monthly membership meeting on April 19th, the San Pedro Lions Club also conducted elections of new officers that will take office in July of 2012. The new incoming president is Merline ‘Mel’ Spain.  Other board members include Rigoberto Kumul as vice President, Bonnie Musbach as Secretary, Ruben Trejo as 2nd vice President, Abel Guerrero as Treasurer, Roger Musbach as 3rd vice President, Enes Anderson as membership Chairman, Jan Brown as Lion Tamer and Paula ‘Petie’ Palaza as Tail Twister. The new directors are Ricky Verde, Francisco Verde, Everette Anderson and Baldemar Graniel. Marina Graniel Kay will remain on the board as the past President.