The San Pedro Town Council affirms their proactive approach in every aspect of running the town. On Monday, April 23rd, Councilor Kenrick Brackett, along with Fire Chief Ernest Dominguez and retired Fire Chief from Louisiana, USA, Gordon Cagnolatti visited various water access areas and inspected the hydrants on the island.

Cagnolatti is a retired Fire Chief with 28 years of service with the Louisiana Fire Department. Cagnolatti has been visiting San Pedro for over 15 years and was contacted by Brackett to advise on the water access situation by fire trucks in San Pedro. 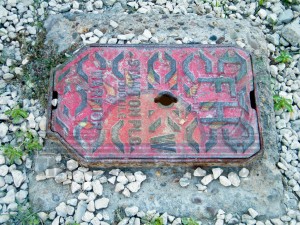 The visit started with the fire hydrant located immediately outside the San Pedro Fire Department. The hydrants were checked to assure that they were functioning properly. Fire Chief Dominguez informed Brackett that across the town core and south of San Pedro, there are a total of nine fire hydrants. Dominguez told The San Pedro Sun that while the hydrants are in place, they are more of a second choice for water sources during a fire on the island. The hydrants are supplied with water by the Belize Water Service, so there is a limit to how much water can be pumped out during an emergency; hence it is used as a secondary option.

Following the fire hydrants’ inspection, the team moved to visit four of the water heads that are commonly used in cases of fire here on the island. A water head is basically any dead end street that ends at the water front that would provide a water source for the fire trucks. According to Dominguez and Brackett, it is very important that these areas be maintained clear of obstacles at all times. Any item that may obstruct fire truck access to the area could mean the difference of a home or lives saved or lost in a fire. 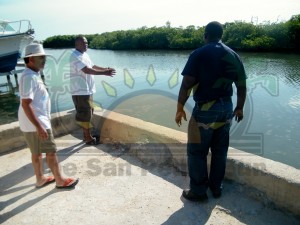 The first water head visited was located at the end of Jew Fish St. and according to both fire experts, represents the ideal of what a water head should be. There is an elevated access to the water, and the water has a depth of over three feet with minimal silt buildup. Following this, three other water heads were visited, including two in the Boca del Rio Area and one at the end of Tarpon St. Of the three heads, the one at the end of Tarpon St. appeared to be extremely low and the amount of silt is beyond what is recommended to make it a viable water head. 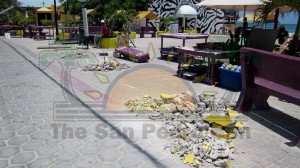 To remedy this situation and provide access to the sea in the Town Core area, the new Council has decided to remove one of the ‘accomplishment’ monuments that was erected east of the Town clock by the previous Council, as well as two cement benches. With this done, fire trucks now have access to the beach. This however, creates a problem with other vehicles which might want to use the access as well to drive on the beach. The council is in the process of remedying this situation. 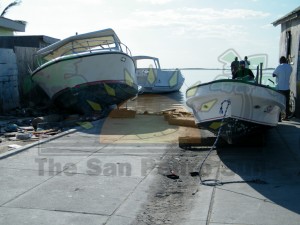 According to Dominguez, the lack of access to the sea in San Pedro Town is a huge problem and needs to be addressed immediately. The new Council has pledged to work with the Fire Department to make the island as safe as possible in cases of fire. Following the sites’ visits, both Dominguez and Cagnolatti are expected to work on recommendations which will be presented to the Council in a meeting later this month.