The workshop was facilitated by the Human Development Coordinator in Women’s Department Cynthia Williams as well as Makesha Suazo. Some 16 police officers attached to both Caye Caulker and San Pedro police departments as well as community members of both communities attended the training. According to Williams the participants studied and carefully analyzed the four different types of domestic violence as it relates to the laws of Belize.  The participants also looked at the role of the police as well as the procedure to follow when responding and investigating the cases of domestic violence.

“The Women’s Department do get a lot of cases were women and some men are experiencing domestic violence whether it is physical, sexual, emotional and even financial abuse so we do have instances where people are being affected and living in these situation. Our goal is to ensure that people have the correct information and know what services they can access through different agencies and government agencies,” explained Williams.  According to Williams the greater number of people who report cases of domestic violence continues to be women. However men are now coming forward to inquire and request information and to find out what their rights are and to find out where they can get the services. Williams also explained that when there is one form of abuse, all four types of abuse can takes place in a household. 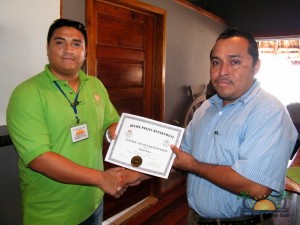 The two-day workshop ended with a small ceremony which had the participation of the Officer in Charge of the San Pedro Police Department Assistant Superintendent Viennie Robinson as well as Councilor Wally Nunez. Councilor Nunez congratulated all the participants and explained that similar training will be conducted in close collaboration with the police department. Shelly Huber, one of the participants said that, “the training was very informative and helpful in understanding how to deal with people affected by domestic violence.”

All participants received certificates of participation presented to them by Councilor Nunez. Similar training is conducted in different parts of the country with various target groups.