« Older: Are disabled citizens being left behind in San Pedro?
Newer: » The Next Miss Belize films in San Pedro


San Pedro recently received the services of three new trained fire fighters brings the fleet to a total of nine fire fighters and around four volunteers. At any given time there will now be two to three fire fighters at the San Pedro Fire Department to operate three shifts: 8am -4pm; 4pm – midnight and midnight – 8am.

According to Ernest Dominguez, Senior Fire Fighter and Officer in Charge of the San Pedro Fire Department, the addition was certainly needed and will definitely add to the effectiveness of the Department in responding to fires on the island

The three fire fighters were part of the Belize Fire Service’s first batch of graduates for the year 2012. On Friday May 25th 24 fire fighters completed an intense 15 weeks of training in Belize City to receive their credentials as official fire fighters. The San Pedro Sun caught up with Irbin Popper and Rudolph Matura, two of the fire fighters deployed to the San Pedro Branch for a little chat.

Irbin Popper, 23 years old resident of Orange Walk Town has been deployed to San Pedro. He stated that his reasons for joining the Fire service were to be able to assist in protecting and saving lives and property. Irbin is married and hopes to be of much assistance to the San Pedro Community. 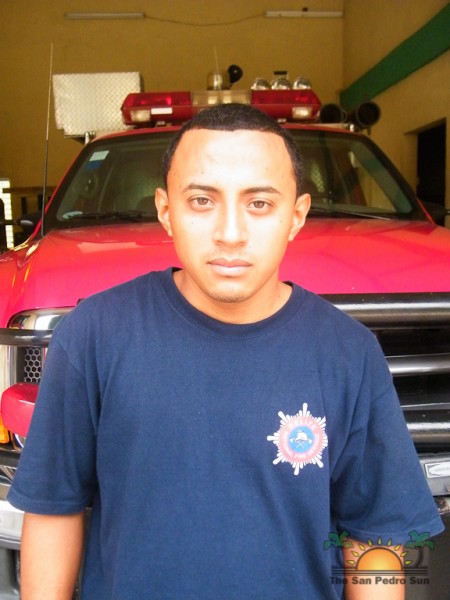 Rudolph Matura Jr. 21 years old is excited to be in San Pedro working. In fact, he even requested to come to the island. “After we pass out they just branch us off. I mi want come out ya though, this place nice, nice environment.” Matura had been combating fires as a volunteer for over five years in Corozal and had passed up many opportunities to join up in the past, however this year he decided to go for it completely. “I decide to join because I like the job, the job nice.”  Matura has made himself at home in San Pedro. He is single and hopes to find that special someone here on the island, which he hopes to be able to call home.

Are new construction projects including parking space?
The Lime Invites You!
Glen and Colleen of Rendezvous Celebrate 20 Years of Marriage!