« Older: Rowan prepares to ‘Walk Across San Pedro’ to raise funds for the Visually Impaired
Newer: » Letter to the Editor: Thanks from the San Pedro Town Library

U.S. fund raiser makes over US$20,000 for injured tourist couple

A fund raiser was held in the United States earlier this year. The purpose was to assist Dana and John “Rob” Leonard. Readers may remember Rob as the visiting tourist on the last day of his honeymoon who met an unfortunate accident when he was ran over by a boat while snorkeling and consequently lost his leg. His wife, Dana was along with him when the accident occurred and also received injuries to her arms. The U.S. fund raiser collected just a little over US$20,000 which was handed over to the Leonards to offset their medical expenses.

Eyewitness to the accident, Wolfgang Wind, had informed The Sun that the two individuals were snorkeling in front of the dock at the hotel they were staying at when he saw a San Pedro Belize Express vessel drive by approximately 50 feet away from the dock and run over the snorkelers. Wind opined that the boat was extremely close to the dock and that ordinarily, vessels travel much further out at sea. He further stated that the vessel that caused the accident eventually returned, but by that time, the injured tourists had already been taken aboard a Caye Caulker Water Taxi boat that had been close behind.

Almost three weeks after the accident, the Belize Port Authority released their findings on the incident in a Press Release dated October 4, 2011 stating, “The snorkelers were inadvertently swimming in an area where vessels navigate and the choppy seas at the time of the incident reduced visibility.”

The U.S. fundraiser included two vacation auctions to San Pedro. A couple weeks ago one of the winners, the Shae family had a visit with The Sun and told us a little about the fundraiser, “Rob works with me. We were just shocked when we heard about it, what had happened. He is the box office manager at the rock club and the ticketing manager for the promotion company that I work for. Everyone on staff felt that we had to do something to help. So a benefit concert was what made the most sense.” 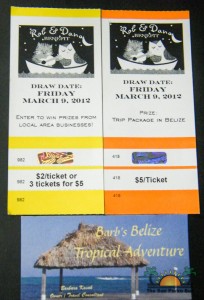 The concert was organized and along with the help of Barb of Barb’s Belize Tropical Adventure and Wolfgang, two lovely two-week vacation packages were put together and raffled silently at the concert. Speaking of their experience on the island, the Shaes stated; “It’s been amazing. There’s been a dark cloud – something we’ve had to struggle with all along though – that we would be coming to enjoy something that turned into a nightmare to them [the Leonards].  I’ll tell you, they almost came with us. They wanted to come back. In part, because they enjoyed their time here and in part because they wanted to face their fears. Rob will tell you, it was great. I do know for a fact that one of the things that’s very important to the Leonards is that there’s positive change from this. They want to know that they can come back and that it’s a safer place because of what they have gone through.” Unfortunately, according to the Shaes, that is not the sentiment from the various individuals that they had spoke to during their visit. According to Danny Shae, he believes Rob and Dana are adjusting well and their health has improved since the incident

Re-opening of land borders and seaports postponed until February 2022