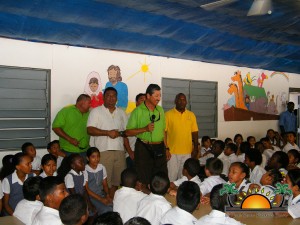 Several activities were held for National Service Day. September 19, 2012 was a day set aside to commemorate the Father of the Nation, and National Hero, Right Honorable George Cadle Price. On Ambergris Caye, the San Pedro Town Council paid official visits to all preschools and secondary schools on the island, accompanied by various community workers. The People’s United Party also held activities, which included a candle walk and a church service.

Early during the course of the day on September 19th, the Mayor, accompanied by most councilors, started their day by visiting Holy Cross Anglican School and eventually progressing to other schools further south. Along with Mayor Daniel Guerrero were firefighters, 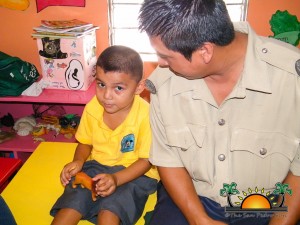 police officers, traffic wardens and Doctor Javier Zuniga,who was representing the Ministry of Health. At the various schools, Mayor Guerrero spoke of Father of the Nation and his contribution to Belize and the importance of respecting him. He also had the students pay respect by having a minute of silence in memory of Price. After the Mayor’s short address to the students, the community workers also spoke of the role they play in the community. The Mayor also took snacks and refreshments for the students as a token of appreciation for their good behavior during his official visit. 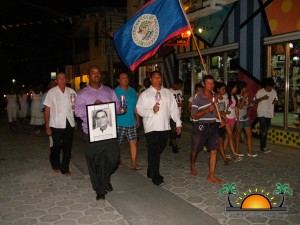 Later in the evening, the PUP held a candle walk which departed from the party’s office on Pelican Street and eventually ending at the Catholic Church on Barrier Reef Drive. At the church, a mass was officiated by Father Arturo Año Nuevo in memory of the Right Honorable George Cadle Price. Father Año Nuevo spoke in length about Price’s contribution as the “champion of Belize’s Independence.” In remembering the life of Price, Milo Paz Jr. highlighted the countless historical accomplishments in Belize which was led by a young Price.

National Service Day was officially declared to be held on September 19th, a day to commemorate the passing of the Late George Price who died in 2011. The Right Hon. George Price led Belize to independence on the 21st of September 1981 after starting the peaceful, constructive Belize Revolution in 1950. Price died on September 19, 2011 at the age of 92.

TripAdvisor® awards certificate of excellence to The Belize Zoo6 Photos