The project has been a “blessing” say residents of San Mateo 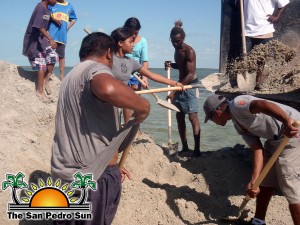 After three full years in progress the San Mateo Empowerment Project came to an end on March 14th, 2013. The culmination of the project took place during a short ceremony at the entrance of the San Mateo Subdivision in northern San Pedro Town. The San Mateo Empowerment Project was the vision of Professor Kim Shackelford and the many students of the University of Mississippi (Ole Miss), who aimed to replace London bridges (long stretches of old wood planks over swamp) with roads for the people of San Mateo.

Residents, students and teachers of the area attended the ceremony to show their appreciation towards the effort made by Ole Miss students and professors who have touched the lives of the needy people of the island. “Kim Shackelford is a blessing to us. San Mateo Empowerment Project is a blessing to the residents of San Mateo and we will forever be thankful,” said Grace Williams the Principal of Holy Cross Anglican School, and a resident living in San Mateo.

“San Mateo is the eyesore of the island,” said the Mayor of San Pedro Town Daniel Guerrero in his remarks indicating that the subdivision should have never taken place. San Mateo subdivision was built on swamp land that lacks adequate infrastructure such as roads, electricity, sewage system and most importantly, potable water. “But slowly we are turning the wheels and improving the lives of the people of this area,” continued Guerrero in his remarks. A change that Guerrero said, started with the San Mateo Empowerment Project.

Shackelford spoke of the first time she visited San Mateo and how shocked she was to see the living conditions of the residents. “I had to walk on the London bridges that stretched out as far as the eyes can see, and I would get tired half way through my walk. I was afraid to fall off the small planks into the black swamp water; I was scared. Three years ago, when I brought a group of students, they too were touched by the living conditions and it eventually gave birth to the project. When they were asked to assess the situation and identify a community need, the students came back in less than three days to say that roads were a need,” reflected Shackelford. “The students found out that before other needs could be addressed, the first thing that was needed in place was road access…. The students came up with the plan to start building roads.” 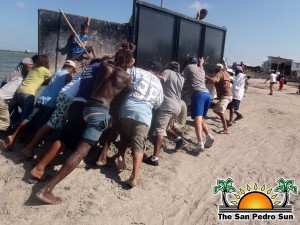 Determined to bring some relief to the people of San Mateo, the Ole Miss students, working along with Kim and the community established the San Mateo Empowerment Project in January of 2010. The students began fundraisers through food sale, yard sales and even karaoke night back in Mississippi in an effort to raise monies that could finance their dream of building roads in the San Mateo Area. “We at Ole Miss don’t make a promise that we cannot live up to and even more so to the people of San Mateo. So we got to work,” said Kim. And work they did and by March of 2010, ground was broken to lay the foundation that would bring a community in Belize and a university thousands of miles away together for one common goal – to build a road for a community in need. 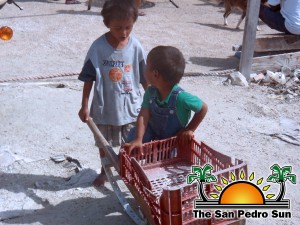 While students in Ole Miss raised money to pay for material, the residents of San Mateo gave of their labor weekly on Sundays for three long years with limited support from outside their community. Over the past three years an estimated US$45,000 dollars was invested in building almost one mile of road. Materials were extracted from the lagoon behind the community, boated to the shores behind the subdivision where waiting residents would transport the material on wheelbarrows. One wheelbarrow load at a time, for five long hours each Sunday, families in the community gave of their time. Some cooked for the laborers while others did the physical road work. It was that hard work and dedication that brought the community once more in a celebratory mood at the culmination of the project.

It was the effort of the San Mateo Empowerment Project and the constant attention the community was getting in the media, said Mayor Guerrero, that made it a mandate for the San Pedro Town Council to address the needs of the over 500 residents in the area immediately after being elected to office in 2012. “We have begun the council’s work to build roads in San Mateo immediately after taking office. We have taken over the building of streets in San Mateo. We will continue to do so until the entire area is transformed,” said Guerrero.

And while the road project by San Mateo Empowerment Project has come to an end, so is Kim’s teaching contribution to Ole Miss. As such, the day’s event was especially significant as it was announced that the well-loved Dr. Kim Shackelford has been appointed as the Deputy Director of Family and Children Services at the Mississippi State Human Service Department. The appointment was made by the Director of the State Human Services Department, Ricky Berry and approved by the state Governor. “I have a lot of friends at Ole Miss that will carry on the work and the things they do in San Pedro. ‘Miss Kim’ does not go away. There are professor that have come with me before and there are students that have graduated and they always come back to do something when they are here. The real big step is true empowerment and I think the people in San Mateo have been well-trained and will be working to develop their own NGO.” A very emotional Shackelford said that if there is one thing she is taking back from the work she has done through the San Pedro Empowerment Project, it is “love, the love for people.”

Note from The San Pedro Sun:
The San Pedro Sun takes this opportunity to thank ‘Ole Miss Kim’, for the incredible generosity and love she has shown for the community of San Mateo and Ambergris Caye. When she first brought her intentions to our attention at The San Pedro Sun, we could never have anticipated the tenacity with which she and her students would take on the challenge. As Kim moves on to an even bigger challenge, (Deputy Director of Family and Children Services at the Mississippi State Human Service Department), The San Pedro Sun congratulates her, and we wish her all the very best. Just as she met the San Mateo road issues head-on, we are confident in her abilities to take on her new post. We love you dearly Miss Kim, and cannot wait to see what wonders you will create in your new endeavors! We are ever so proud of you – YOU GO GIRL!!