Five residents of San Pedro Town were found not guilty on Thursday July 11th before Magistrate Sherigne Rodriguez after they were charged on the suspicion that they were fishing within the Hol Chan Marine Reserve. The charges arose from an incident on the 28th of July, 2012 when the Michael Kuhn – boat captain, Roan Gonzalez – licensed tour guide, Guillermo Valdez – licensed tour guide, Melvin Montesino – fishermen and a 13 year old minor, all of San Pedro Town, were caught sometime around 11PM inside the reserve on a boat named ‘Natural Mystic.’

At the time, The Belize Fisheries Department on behalf of the Government of Belize charged the five for illegally fishing within a marine reserve (which went against the Belize Marine Reserve and Protected Areas Act of the Laws of Belize.) Around the time of the incident, Hol Chan Marine Reserve Ranger had set up a sting operation after receiving information of illegal activities within the reserve. That night, the rangers sighted lights in the reserve and found the vessel with the five males within the park. 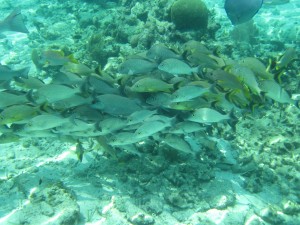 Hol Chan Marine Reserve Manager and Biologist Miguel Alamilla explained in court that the five “were suspected of spearing and fishing” in the reserve. When the vessel was caught, there was no fishery product with the five men. In court, Richard “Dickie” Bradley, Attorney for Kuhn, argued that the only evidence brought before the court were testimonies from the Fisheries Department gathered from the rangers working the night of the arrest at the reserve. He was able to successfully argue that there was no evidence to suggest the “suspicion” that the five were “spearing and fishing” as indicated. Because there was no other evidence other than the statements from the rangers, Magistrate Rodriguez found the five accused not guilty of charges and the men were allowed to walk free out of court.