Home » Community and Society » In memory of our departed friends


In memory of our friend John Collin Clark III

John Collin Clark III of Ponchatoula entered into rest at his home on August 31, 2013 surrounded by his loving wife and family. He was 60 years old and was the second of six children of Beverly Lafaye Clark and John Collin Clark Jr. He was born on February 2, 1953 in New Orleans where he grew up and formed his many life loves. Collin married his wife Kathy Kirkland in 1999 and lived in Ponchatoula until they moved to Belize in 2000 then back to Ponchatoula in 2005. Collin was a devoted Catholic, husband, brother, uncle, godfather, paw paw, and friend. He will be dearly missed by all. After his Lord Jesus, family and friends he was a lifelong sailor and entrepreneur. Collin’s love for sailing started at the young age of 8 when his Dad bought a 12′ Styrofoam sailboat for him and his siblings to sail on Bayou St. John. That love of the wind and water continued with youth sailing lessons, the family sailboat, Sirius followed by five decades of competitive and leisure sailing from the Chesapeake Bay Stiletto Nationals, the historical Gulfport to Pensacola race, and many more regattas to his leisure trips including one from Pascagoula to Belize. Collin’s entrepreneurial spirit began with selling corn and monkey grass to Bancroft Drive neighbors followed by Clarks Catamarans, the first New Orleans Hobie Cat dealer and the only one in Louisiana. His sailing business expanded to Sailboats South, a sailing business including monohulls, windsurfers, boat rentals, sailing lessons, and much more. His boat businesses transformed into international and domestic residential developments from Ponchatoula to San Pedro, Belize Central America. He is preceded in death by his father John Collin Clark Jr. and mother Beverly Lafaye Clark and his brother Thomas O’Neill Clark. He is survived by his wife Kathy Kirkland Clark, sister Emery Clark (Ralph), brothers Byron Clark (Jennifer), Berkery Clark (Lynn), and Edward Clark (Angela), nieces Emery Whalen, Kingsley Clark, Victoria Clark, and Camille Clark, nephews Rafe Whalen, Byron Clark, Thomas O’Neill Clark II, and John James “Jack” Clark, stepdaughter Margaux Lenior Vourvoulias, son in-law George Vourvoulias III, and grandchildren George and Gwyneth Vourvoulias.
Published in The New Orleans Times-Picayune September 4, 2013 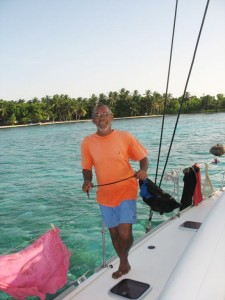