As crime continues to concern the business community on Ambergris Caye, the need to find a viable solution to its escalation has become a top priority. To start finding solutions, the Belize Tourism Industry Association San Pedro chapter (SP BTIA) held a public meeting with stakeholders on Thursday, June 7th at the Angel Nuñez Auditorium. A group of dynamic citizens and speakers discussed the issue and shared their ideas towards the best way of dealing with the alarming situation threatening the island’s stability. 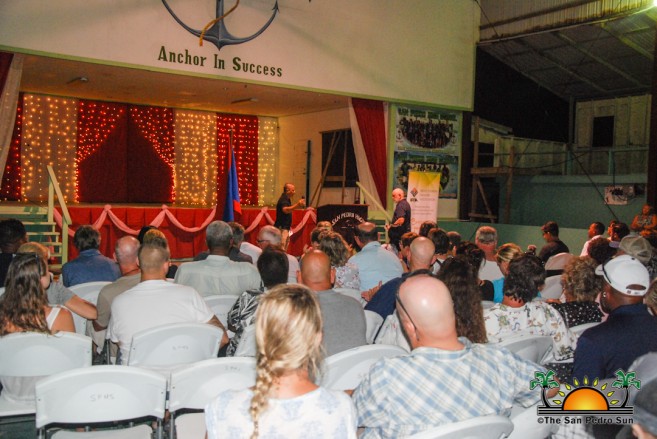 The event which started shortly after 6PM was well attended by citizens from all corners of the island. BTIA’s Executive Director John Burgos gave the welcome remarks informing the audience the purpose of the gathering, which sought to set actions in place and try to alleviate the crime situation.

Chairwoman of the SP BTIA Tamara Sniffin gave her opening remarks thanking everyone for attending the event. She emphasized that the meeting was ‘For the Love of San Pedro,’ speaking about the sad situation of crime affecting the community in one way or another. “Recent criminal activities on this island now have residents and business owners fearing for their safety and ultimately their livelihoods,” said Sniffin. She told attendees that everyone must remain positive and focus on real solutions.

Sniffin also informed the audience that selected speakers from among them had been chosen to share their testimonials of their lives in San Pedro and how important the island is to them. They included Celi McCorkle representing San Pedro Holiday Hotel, Chairman of the San Pedro Tour Operators Association Everette Anderson, Gary Greif and Mayor Daniel Guerrero from The San Pedro Town Council, Dr. Renae Reasa from the Dr. Otto Rodriguez San Pedro Polyclinic II, Carlo Segura from Carlo & Ernie Runway Bar, Natasha Stuart, Lady Dixie Bowen from The Island Academy/Bowen & Bowen Ltd, Director of Marketing and Industry Relations at the Belize Tourism Board, Karen Pike, President of the BTIA Raineldo Guerrero, Philip Henry, and Officer in Charge of Coastal Executive Unit Superintendent Henry Jemmott. Sniffin made it clear that everyone’s opinion is important and invited them to write their concerns and suggestions on index cards provided. She also informed the crowd that Prime Minister Right Honourable Dean Barrow and the Ministry of National Security have all shown great interest in supporting this initiative.
All speakers talked about their past experiences of the old San Pedro and how insecure the island has become in the recent years. They called on the strengthening of the security enforcement on the island before the tourism industry is destroyed by the crime that threatens to get out of control. Others touched on the lack of inadequate basic services on the island for health which puts a strain with the rise in crime, while also reminding everyone about the beauty Ambergris Caye has to offer, thus, the importance of taking care of it. The need for a boat manifest, more patrolling by police officers, 24/7 manned police booths, better pay and housing for law enforcers moving to the island, and a more accountable judiciary system where some of the recommendations shared with the audience. 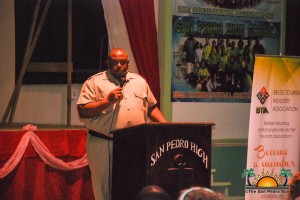 Jemmott encouraged the attendees to form a coalition and assist and guide the police. While ensuring that the government provides San Pedro with their fair share of police personnel and resources to tackle crime. Jemmott claims that one of the issues is the insufficient manpower at the island’s police department, but then announced that more officers are expected to be assigned to the island. Before his address, he encouraged everyone to not be afraid and report every criminal activity. “We need to come forward and start to do the right thing,” he said. Jemmott indicated that when it comes to investigation, the police still rely on witnesses. He stated that the Department is slowly moving into forensics, but until then, people need to cooperate and work along with the police. 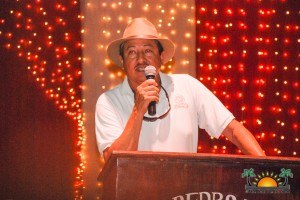 Mayor Guerrero closed the presentations thanking everyone for attending the event and assuring them that his administration has been working hard to address the crime situation on the island. He said that the island is growing at a fast pace and is no longer the little fishing village everyone spoke about. In regards to crime and other issues on the island, Guerrero stated that in order to find solutions it has to be a collective effort by everyone along with the local authorities. “You have to ask what you can do for your town or your community,” said Guerrero. “I have been trying to get a military base in northern Ambergris Caye. We have managed to get the land where there will soon be a base for the Belize Defence Force, Coast Guard, or the Gang Suppression Unit- GSU.” Guerrero mentioned that he had been in meetings discussing solutions for the crime activity on the island. However, he stated that he cannot go into the details about what has been planned. Guerrero ended by encouraging everyone to work together and that The SPTC supports any initiative that aims for the well-being of the island.
A future meeting is already on the plans to continue working on a proactive solution to any potential criminal activity on Ambergris Caye. The SP BTIA thanked everyone for attending such important event and will keep the community informed of their future plans.

Your help is needed for Mother’s Day Brunch Soup Kitchen