On Monday, February 25th, a group of potential investors visited the site of the proposed international airport in the Basil Jones Area, northern Ambergris Caye. Accompanying them was Area Representative and Minister of Tourism and Civil Aviation, Honourable Manuel Heredia Jr. The group was in the country allegedly preparing paperwork to start the construction of the airport that will bear the name ‘Efrain Guerrero International Airport.’ However, those rumors were denied by Heredia, who told The San Pedro Sun that there is nothing official on the project and that it was just a routine inspection. 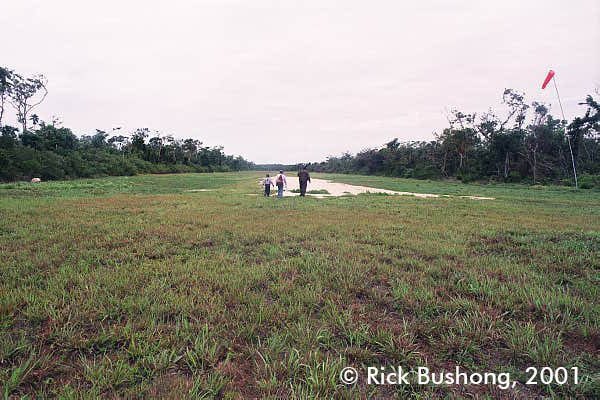 Heredia stated that the group is actively involved in the hospitality and travel industry. They also visited other parts of Belize looking at other investment opportunities. He added that the group, who mainly work from the Dominican Republic, is showing a lot of interest in investing in the proposed international aerodrome on the island. Heredia said that a formal decision might be taken in the upcoming weeks. “If they decide to invest and the government accepts their offer, then it will happen,” said Heredia. The Minister pointed out that he will always support this project for the island.
The planning of an international airport on the island, which has been estimated to cost over US$100 million, was penned in December 2017, when the Government of Belize signed a Memorandum of Understanding (MOU) in the capital city of Belmopan. The MOU was signed with a developer named Jorge Abraham Jaen of International Airport Alliance Belize Limited. However, a few days after the signing of the MOU, Jaen came under scrutiny following accusations of being a fraudster. Dissemination of documents showed that Jaen’s past accused him of making false representations to obtain loans and was arrested in 2006 on charges of fraud, with a previous conviction for conspiracy to commit extortion and voter fraud in the United States of America.
Many island residents believe that the island does not need an international airport at this moment. They do not see the support coming from the mainland because it will affect the Phillip Goldson International Airport in Ladyville. Thus, the government may not agree to a second airport at this time. Island residents instead, would like to see other types of infrastructure like vocational schools for the youth, better water supply, and a much-needed hospital.
The San Pedro Sun will continue following this developing story.