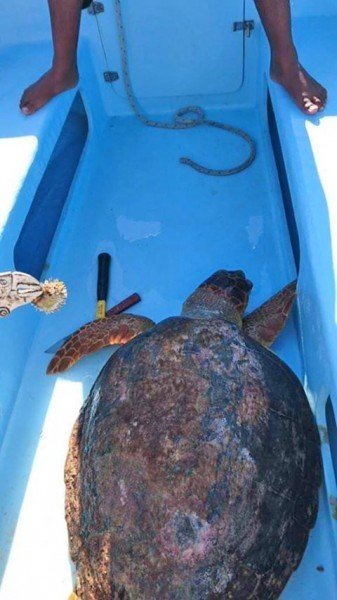 It was supposed to be just an ordinary evening out on the water, sailing aboard the Felicity on a sunset cruise. However, as tour guide Carlos Soto found out, always expect the unexpected! About 400 feet away from the main Hol Chan Marine Reserve he and Captain Horace Bladen noticed splashing and a struggle in the waters ahead. Fearing that someone was drowning, they drew closer, but their keel would not let them get close. It was close enough, however, that they realized it was a loggerhead turtle in distress.
“We recognized it as the friendly loggerhead turtle from Chato’s Graveyard, and of course, the poor animal looked like it was drowning,” said Soto. “We would see it sinking underwater, then try to come up again for air. There were boats passing but they didn’t notice.” He says that they quickly began signaling and calling for help any way they could, until one boat stopped. After explaining the situation, that boat captain caught the attention of a Marine Park Ranger, who eventually was able to pull the turtle out of the water and into their boat.
Soto thought the turtle was choking on a piece of plastic, but to everyone’s surprise, when the culprit was finally removed from the loggerhead’s windpipe, it was a pufferfish. “We were surprised, but also glad it wasn’t plastic,” said Soto. “The rangers did a great job of removing the fish from the friendly loggerhead, and we’re glad that he will continue to greet our visitors for years to come.”
We too are thankful that Soto and Bladen took the initiative to save one of our beloved sea turtles. These magnificent creatures are a vital part of our waters, and practically mascots of the Hol Chan Marine Reserve.