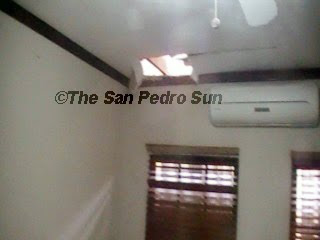 When employees at the offices of Grand Belizean Estates arrived to work around 7:30am, they discovered that the place had been broken into. According to one of the employees, it appeared as though someone entered through a hole in the overhang of the roof of the building located on Barrier Reef Drive, upstairs of the Atlantic Bank kiosk. The intruder then entered the office after stamping a hole in the kitchen area. The back door was closed but unlocked, which is assumed to be the exit for the perpetrator(s).

Stolen from within were three (3) laptops – one (1) HP, one (1) Dell, and one (1) Compaq brand. The offices were ransacked, and paperwork/files were strewn all over. Coffee was used to vandalize portions of the office space, and it seemed that the intruders helped themselves to some snacks that were located in the kitchen area, after which, they defecated on the kitchen floor.

Grand Belizean Estates is offering a $5,000 reward to anyone who can bring forward information that leads to the recovery of the laptops and to the arrests of the individual(s) responsible.

Caribbean Depot Collections Officer robbed on the way to the Bank