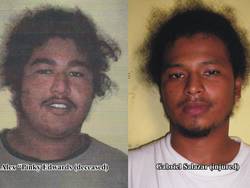 Alex “Pinky” Edwards, Benjamin Peters and Gabriel Salazar are no strangers to the news. In fact, they were wanted in Belize for the Spanish Lookout, March 13th, Scotia Bank gun point robbery. The news today is that at least two of the men were killed and one remains hospitalized in San Pedro Sula, Honduras.

The San Pedro Sun confirmed with the family of Alex Edwards (living in San Pedro Town) that he was killed in Honduras sometime before Monday, September 27th along with Benjamin Peters. Robert Villafranco, the uncle of Alex Edwards explained that funeral services for his nephew were held on Wednesday, September 29th at 4pm in San Pedro Sula, Honduras. Villafranco also stated that the parents of Alex travelled to Honduras and identified the bodies to the Honduran authorities.

Neither Villafranco, nor the grandfather of Alex Edwards, Frank Edwards Sr., would say what were the circumstances that led to the death of their relatives, but reports to media in Belize is that they were involved in a highway bus robbery and were killed during a shoot out with authorities in San Pedro Sula, Honduras. The relatives of Peters, who are from Santa Elena, Cayo are making arrangements to transport his body back to Belize for a funeral. Gabriel Salazar, as we understand, remains hospitalized in Honduras.

Police in Belize have not commented on the incident. Alex Edwards was also under investigation for the February 2009 triple murder in North Ambergris Caye.